Another Violent Night at U.S. Courthouse 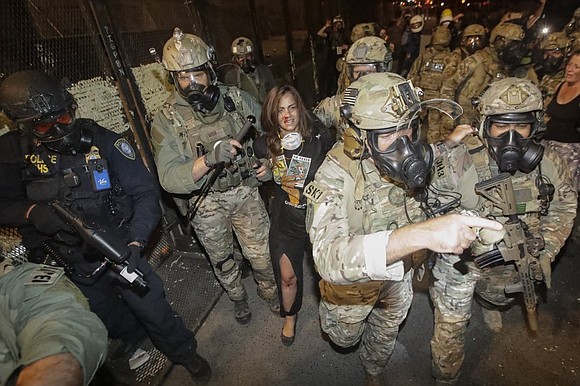 (AP) — A night marked by a reported shooting and a bag found with loaded rifle magazines and Molotov cocktails amid a peaceful downtown Portland protest morphed into an intense early Monday morning confrontation between demonstrators and federal law enforcement.

The U.S. agents repeatedly fired what appeared to be tear gas, flash bangs and pepper balls before dawn to clear a mass of protesters outside the Mark O. Hatfield United States Courthouse.

Some protesters had climbed over the fence surrounding the courthouse, while others shot fireworks, banged on the fence and projected lights on the building.

As the protests raged over the weekend in Portland, demonstrations in support of racial justice and police reform in other cities around the U.S. were also hit with violence. Protesters set fire to an Oakland, Calif., courthouse; vehicles were set ablaze in Richmond, Va; an armed protester was shot and killed in Austin, Texas; and two people were shot and wounded in Aurora, Colo. a car drove through a protest.

In Portland, where federal agents were dispatched by President Trump to protect U.S. government property, the federal courthouse has been the lightning rod for protesters.

The city has had nightly protests for two months since the death of George Floyd in Minneapolis in May. President Donald Trump said he sent federal agents to Portland to halt the unrest but state and local officials said they are making the situation worse.

The protest late Sunday started peacefully, with organizers giving speeches and leading chants with the crowd.

But things intensified as the night wore on. U.S. agents declared an “unlawful assembly,” and just after 1 a.m., confronted protesters on the street and worked for hours to clear the area. Several people were seen being detained, but it was not immediately clear how many may were arrested.

At times, protesters scattered amid flash bangs. Officers deployed more tear gas and less-lethal munitions, and formed a line to push back demonstrators. Many dispersed, but several protesters remained well after 2 a.m. in what has become a familiar scene for Portland.

Over the weekend, authorities declared a riot early Sunday after the protesters breached a fence surrounding the city’s federal courthouse building where U.S. agents are stationed.

The protesters stayed on the streets past 2:30 a.m., forming lines across intersections and holding makeshift shields as police patrolled and closed blocks abutting the area. Portland police said they arrested six people.

Sunday evening, Portland police responded to a shooting at a park close to the site of the overnight protests.

Two people were detained and later released, police said Monday morning. The person who was shot went to the hospital in a private vehicle and was treated for a non-life threatening wound.

Also late Sunday, police said someone pointed out a bag in the same park, where officers found loaded rifle magazines and Molotov cocktails. The shooting was not related to the items, police said. It was not clear whether the shooting or the material found in the bag was was connected to the protests.

Portland police said the department’s officers were not involved in dispersing the crowds during the protest early Monday.