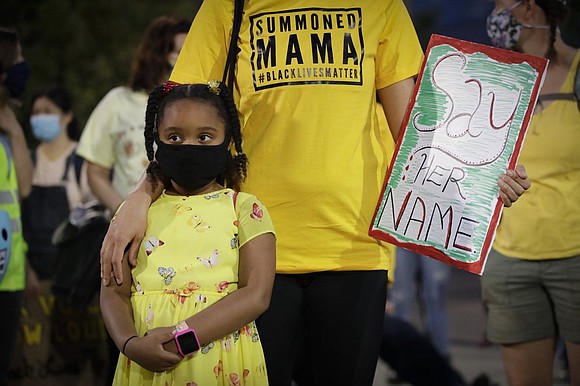 Zoe, 6, and her mother Lacey, no last names given, prepare to march during a Black Lives Matter protest in Portland on Tuesday, July 28. (AP Photo/Marcio Jose Sanchez)

Faculty at over a dozen Portland area colleges and universities - including Portland State University, Reed College, University of Portland, Pacific University, and Lewis & Clark College - have circulated a statement denouncing the heavy handed tactics used by Portland Police and by the federal agents that have inflamed the tensions in the streets surrounding federal buildings in downtown Portland and elsewhere in the city.

The number of faculty who have signed the statement in less than four days is approaching 400, backers of the petition said Wednesday.

The statement reads as follows:

“We are faculty and educational professionals in the greater Portland, Oregon metropolitan area. We stand in solidarity with the public demonstrations that have been occurring in our city for nearly two months.

Those of us who have been present at these demonstrations can attest that violence against mostly peaceful demonstrators has primarily been instigated by the Portland police, who have assaulted scores of journalists, legal observers and peaceful protesters with tear gas, pepper spray and flash bang grenades. This violence is only a small sampling of the kind of abuse and mistreatment that Black Portlanders have experienced at the hands of our local police for many years.

On July 12, federal officers shot Donavan LaBella, 26, in the head with an impact munition.

On July 15, federal officers in green military fatigues and generic “police” patches emerged from an unmarked minivan and seized and searched Mark Pettibone, 29 and detained him in a holding cell at the federal courthouse and then released him without giving any reason for his detention.

On July 21, federal officers shot Maureen Healy, chair of the Department of History at Lewis and Clark College in the head with a “less than lethal” munition.

Participation in and support for these demonstrations and similar ones around the country is an expression of democratic responsibility and the hope that ordinary people have the capacity to change our society for the better.

We denounce the indiscriminate use of violence directed towards participants in these demonstrations by both the Portland police and the federal agencies that are illegally operating in our city. We encourage the efforts of our respective institutions to foreground and address issues of racial and social justice. We stand with our many colleagues who have been participating in nonviolent protests throughout our city and who have been counted among those injured by federal agents.”