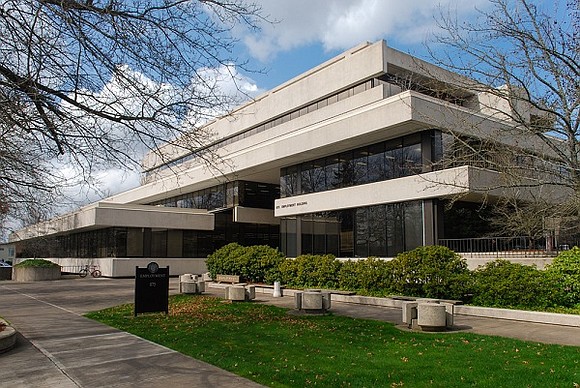 The Oregon Employment Department building at the state capital in Salem.

(AP) — Gov. Kate Brown has fired the head of the Oregon Employment Department after long delays in delivering benefits to people who have lost jobs during the coronavirus outbreak.

Brown said Sunday she had asked for and received the resignation of Kay Erickson, who had run the department since Brown appointed her to the post in 2016. Brown issued stay-at-home orders to stop the spread of COVID-19, and many businesses have been closed or operating at reduced capacity.

“In the middle of this pandemic, the continued delays from the Oregon Employment Department in delivering unemployment insurance benefits to thousands of out-of-work Oregonians are unacceptable,” Brown said in a statement.

People laid off as a result of the coronavirus pandemic have been struggling to receive benefits for the last two months, in some cases without a paycheck.

“While all states have faced challenges in implementing expanded benefits, Oregon’s problems have persisted far too long with far too much pain inflicted on unemployed Oregonians,” said Wyden. “The Oregon Employment Department’s mounting list of problems hit a new low this week with revelations that an estimated 200,000 Oregonians are still waiting for benefits and that leadership cannot say with confidence how much is owed to Oregonians aching for funds to buy groceries, pay the rent and more.”

According to a report in the Oregonian, the employment department struggled through a series of leadership crises in the years before Erickson took over. She steered the department through a period of relative calm afterwards, as the state’s jobless rate fell to an all-time low of 3.3% and the agency had relatively few benefits claims.

When the pandemic hit, though, the employment department was quickly overwhelmed as more than 440,000 Oregonians filed for jobless benefits and the state’s unemployment rate spiked to an all-time high, 14.2%.

The department, using outdated equipment, was unable to keep up with the volume of claims or adapt its technology to accommodate changes in the jobless program. Although Oregon received $86 million federal funding for a computer upgrade in 2009, and successive audits warned the department was unprepared for a spike in jobless claims, work replacing the computers isn’t due to be complete until 2025.