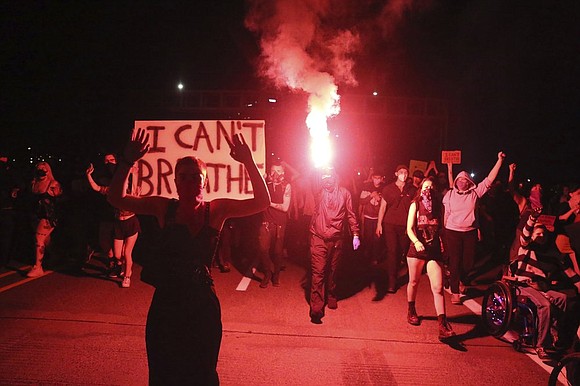 Portlanders march with flares on Friday, May 29, following a George Floyd vigil at Peninsula Park in north Portland. Protests have been erupting all over the country since the May 25 death of Floyd who died May 25 after his neck was pinned to the ground in police custody in Minneapolis. (Dave Killen/The Oregonian via AP)

"They will not be on the front line making arrests or doing crowd control,'' the governor said. "They will only be acting as support personnel behind the scenes only.''

Mayor Wheeler and Oregon’s top federal prosecutor asked the governor to call up the Oregon National Guard to help police with protests that have spun into violence for three consecutive nights.

Wheeler said at a news conference Monday morning that Brown had declined to call up the National Guard on Sunday, instead opting for more involvement by the Oregon State Police. But when asked, Wheeler said he agreed with a call by U.S. Attorney for Oregon Billy J. Williams to bring National Guard troops to the city to guard infrastructure such as federal courthouses and police offices.

“What I saw at the Justice Center …. was sickening. This has to stop and in order for that to happen in the city of Portland, we need help,” Williams said. “We need bodies, we need more numbers to do something to stop this ridiculous violence. This just cannot keep up.”

The governor said she declined an earlier request by Wheeler to put Oregon's National Guard troops in direct confrontation with protesters.

Mayor Wheeler also extended a curfew order for the entire City of Portland Monday for the third night in a row. The curfew will again go into effect Monday night, June 1, at 8 p.m. and runs through 6 a.m. Tuesday.

The violence came after thousands of protesters held a largely peaceful demonstration outside the Multnomah County Justice Center in downtown Portland. At one point, some police officers took a knee with protesters and three people in the crowd had a private talk with Police Chief Jami Resch, authorities said.

Police said protesters smashed windows at the federal courthouse and through loudspeakers authorities declared the late-night gathering a civil disturbance.

Wheeler said, if deployed, the National Guard would not have a role in crowd control but would instead guard federal, state and city buildings.

On Saturday, police arrested 48 people after downtown storefronts were vandalized and fires were set overnight. On Friday, at least 13 people were arrested amid Portland protests.

Elsewhere in Oregon, authorities said between 7,000 and 10,000 people gathered at the federal courthouse in Eugene on Sunday and marched to a local park in a peaceful demonstration. After the event ended, about 1,000 people continued to protest.

In Salem, up to 400 people marched and got into a confrontation with police that resulted in between six to eight arrests.

The demonstrations were in response to the killing of Floyd, a black man who died May 25 after a white Minneapolis police officer pressed his knee on Floyd’s neck until he stopped breathing. His death has prompted protests across the U.S. and Europe.