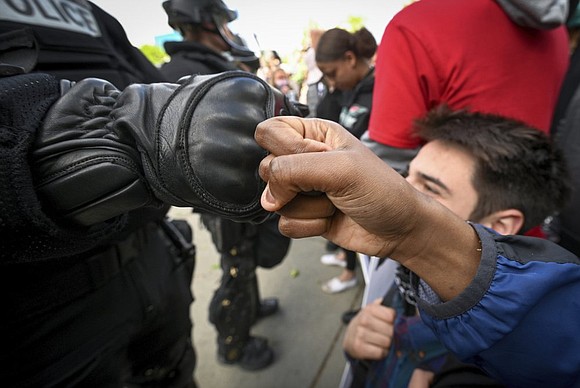 "Respect goes both ways," says a protester named Monique who fist-bumps a Spokane police officer dressed in riot gear outside the Spokane County Courthouse on Sunday, May 31, 2020, in Spokane, Wash. during a protest over the death of George Floyd in Minneapolis. (Colin Mulvany/The Spokesman-Review via AP)

Inslee had previously authorized 400 troops for Seattle and 200 troops for Bellevue. On Saturday night, people smashed downtown Seattle storefronts and stole items from many businesses, tossing mannequins into the street. On Sunday, there was looting in stores and shopping malls in Bellevue, Spokane, Tukwila and Renton.

Inslee’s activation means more troops could be available to help control unrest. The governor planned a Monday afternoon news conference to speak about the protests.

“We must not let these illegal and dangerous actions detract from the anger so many feel at the deep injustice laid so ugly and bare by the death of George Floyd,” Inslee said in a statement late Sunday. “But we also will not turn away from our responsibility to protect the residents of our state.”

Protestors in Seattle march on Sunday, May 31to call for justice over the death of George Floyd, a black man who died May 25 after being restrained by Minneapolis police officers. (Ken Lambert/The Seattle Times via AP)

Interstate 5 through downtown Seattle was closed Sunday afternoon because of protest activity, the second day in a row the main north-south freeway on the West Coast was shut down, and there was also widespread disruption in Bellevue, Washington.

Bellevue Police said dozens of people broke into Bellevue Square, a large shopping mall. Officers entered the facility and chased people out. Bellevue Police Chief Steve Mylett said at an evening news conference that authorities learned earlier that a criminal gang planned activity in the city Sunday afternoon. He said there was widespread incidents of looting and assaults, and the criminal element “swelled very quickly.”

“They were there to destroy,” Mylett said. “We welcome peaceful protest ... this is something different.”

Mylett said he was disgusted at what happened to Floyd, who was killed when a Minneapolis officer knelt on his neck, but that violence overshadows legitimate protests.

After a night of rioting in downtown Spokane, all Spokane County buildings on the courthouse campus were closed Monday.

That was after peaceful protests in the death of George Floyd in Minneapolis devolved into a riot that saw Spokane law enforcement officers shooting tear gas and rubber bullets into the crowd on Sunday night.

There were no reports of serious injuries in Spokane.

Demonstrators in Washington and around the country have been protesting the killing of Floyd, a black man who died May 25 after a white Minneapolis police officer pressed his knee on Floyd’s neck until he stopped breathing.