Our Inescapable Reality as Black Men 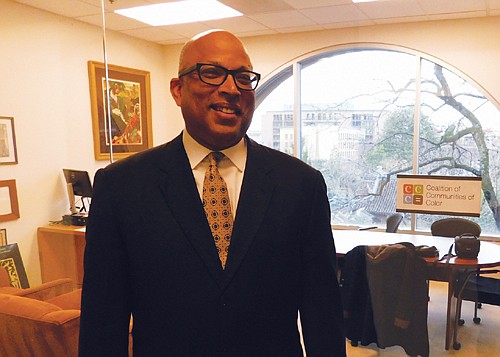 Marcus Mundy of the Coalition of Communities of Color works to advance racial justice by organizing collective, cross-culture allies. Photo by Beverly Corbell

We know all the victims’ names by now. We know the outcomes. We all know step by inexorable step the Kabuki theater that ensues after each such incident, the choreographed recitation of the injustice. The video is shared; the indignation is palpable; the protests begin; the lawyers go on television; usually, the perpetrators are not punished; the laws don’t change; police training doesn’t change; the cycle begins again…

Many tears were shed as we collectively and individually watched replays on the daily news no less of the very life oozing out of a man who looked just like us, right in front of our eyes. Such frequency of these events, I believe, attempts to numb us to its harshness, but it cannot, not for Black men or those who love us. Our mere existence in the world as Black men should not evoke such rage from others, and such callous indifference for human life should evoke outrage, not just from Black people, but from all people.

I would trade a million virtue-signaling lawn signs stating “Black Lives Matter” and “In Our America, Love Wins” for a single day of those epigrams being realized. Arbery, Bland, and Cooper must not be the ABCs of Black life in America. They should be our societal wake-up call.

As the Mayor of Minneapolis reminded us, “If you had done it or I had done it we would be behind bars right now.” But it wasn’t the mayor, or me, or you; it was a craven Minneapolis “peace officer” who committed this incomprehensible act as his three equally culpable and enabling colleagues looked on.

Fannie Lou Hamer once plaintively said, over 50 years ago, “…I am sick and tired of being sick and tired.” She was speaking about civil rights then, but that phrase should apply to all of us right now, especially when it comes to the incessant, inhuman ways that Black men are treated in America. This person violated not just the civil rights Ms. Hamer was speaking of, but the most essential human right: The right to live.

After witnessing the replay of the slow motion demise of George Floyd, many of us feel horror; but that horror no longer means anything without action. Our bromides and platitudes and good intentions and righteous indignation, however heartfelt, are as a flatus in the wind unless we are prepared to work for change, and respectfully demand that change.

I reflected today that the mission of the Coalition of Communities of Color (CCC) is to “address the socioeconomic disparities, institutional racism and inequity of services experienced by our families, children and communities; and to organize our communities for collective action resulting in social change to obtain self-determination, wellness, justice and prosperity.” If little else is clear, institutional racism and inequity of services are real, and evidenced in the treatment of George Floyd. We must see what is happening in the world and, with our mission in mind, commit ourselves to action.

We must, and immediately work to remove any policies on our existing jurisdictions’ books similar to those in Minneapolis, which may permit the use of the procedure used to kill George Floyd; work to facilitate and codify the implementation of suggestions developed by groups such as the Portland Police Reform Network, the Albina Ministerial Alliance Coalition for Justice and Police Reform, etc., in a formalized process; work to strengthen the Independent Police Review Division and the Citizen Review Committee, with the goal of adding power to compel testimony; seek to facilitate and codify change in Oregon State Statutes, as appropriate, for use of deadly force by officers; work to have jurisdictions commit to training/retraining all law enforcement officers on proper use of force decision making matrices; work to have jurisdictions commit to explicit, comprehensive Diversity, Equity, Inclusion training for all law enforcement officers, as well as heightened de-escalation training; and work to seek and acquire a commitment from all police unions, governmental leaders and officers in Oregon to condemn illegal or immoral behavior from police officers

The Coalition of Communities of Color urges all of you to take the steps we have outlined, with us. There is more than one pandemic raging in America, and none will be solved without collective action.

Join us. Help us end the reruns of “Another Black Man Killed Today Show.”

Join us. Help us breathe again.

Marcus C. Mundy of Portland is executive director of the Coalition of Communities of Color.