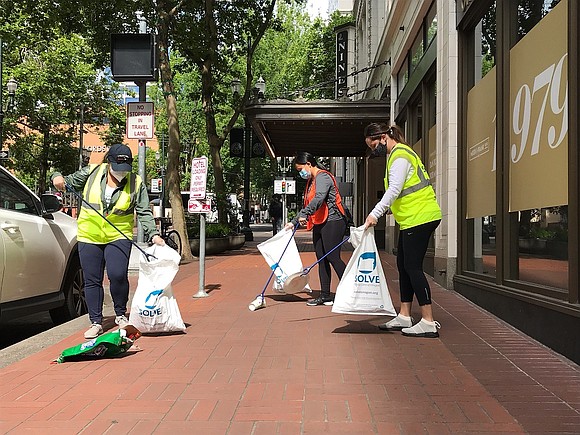 Today hundreds of volunteers joined SOLVE and Starbucks in Pioneer Courthouse Square to cleanup downtown Portland. SOLVE staff were blown away by the quick turnaround of volunteers who signed up for the event, which was opened to the public and posted less than 24 hours before the cleanup kicked off. Nearly 300 volunteers showed up to pitch in for the cleanup effort, resulting in over 800 pounds of trash collected from Portland city streets.

“We were pleasantly surprised to see the number of people who attended. It was wonderful that volunteers were excited to be there and thankful for the opportunity to help,” noted SOLVE Chief Executive Officer Kris Carico.

Many volunteers commented at how relatively clean downtown Portland seemed, given that thousands of people have come together in protest over the last few days. Still, volunteers were able to fill 160 heavy-duty trash bags.

Anyone who is interested in participating in the next volunteer cleanup should check SOLVE’s social media or website, solveoregon.org, for the date announcement and details. SOLVE would like to extend a special thanks to their partners, Central City Concern and Downtown Portland Clean & Safe.

SOLVE is a statewide nonprofit organization that brings people together to improve our environment and build a legacy of stewardship.