A Call to End Police Militarization 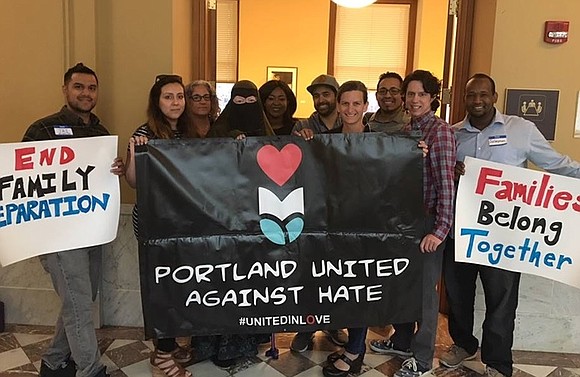 Members of the group Portland United Against Hate, a coalition working to end hate and build a safe, healthy, and loving region.

Portland United Against Hate, a coalition of more than 80 organizations working to end hate and build a safe health and loving region, issued the following statement this week regarding the protests against the killing of George Floyd in Minneapolis, the Black Lives Matter movement and police violence.

Our group is outraged at the focus on ending property damage when European colonizers and enslavers, and the nation that grew out of that colonization, have been perpetrating genocide, rape and horrific crimes against Indigenous peoples for 500 years and rape, slavery, mass incarceration, and all manner of genocide against Black people for 400 years.

We ask: Why aren’t “the authorities” clamping down on White Nationalism; running to end mass incarceration; broken windows policing; and the wars on drug users, sex workers, people in mental health crisis, people who are unhoused, and above all the war on Black lives with this vigor, with this intensity, with this single mindedness? Or even at all? End the war on your people and the people will have no need to rise up.

cities, continuing their tactic of inciting a race war. While you may have read the news about this in Minneapolis, right here in Portland protestors have seen Patriot Prayer members. Their intention to create havoc and injury and blame must be stopped.

amongst crowds? How can we expect to be protected when the PPB refused to shut them down last summer when they boldly arrived for rallies openly carrying weapons?

How can we expect to feel protected when we have heard credible accounts that squarely put the blame on police for inciting violence; targeting children, medics and black bloc members; and not keeping order, not protecting life and not putting out fires while protestors were working to do so?

It is time to dismantle White Supremacy. We call out for a society that not only marches through the streets by the thousands, but integrates into all of its systems, policies and institutions the demand that Black Lives Matter.

If you experience hate or harassment in any form and want to connect with a PUAH partner providing rapid response, contact the following culturally, community and issue specific organizations.

More resources can be found at our website, PortlandUnitedAgainstHate.org

Together we built a network of providers who report and track hateful acts as we provide training and trauma informed care to individuals and communities.