Black leader: Change will be won in streets 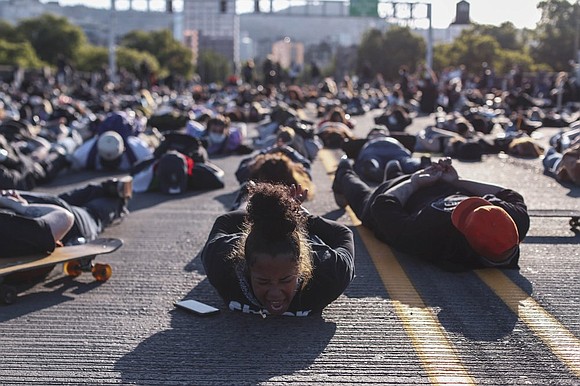 Thousands of peaceful Portland protesters lay down for nine minutes of silence June 1 on the Burnside Bridge with their hands behind their backs to memorialize the time a Minnesota police officer’s knee pinned George Floyd’s neck to the ground, a black man who died May 25 under police restraint. (AP photo)

A historic leader of Portland’s African American community joined thousands of protesters in northeast Portland Monday night to demand police accountability and an end to racism and police brutality against African Americans.

Kent Ford, 77, a life-long member of Portland’s black community and the founding member of the Portland chapter of the Black Panther Party going back to the civil rights era of the 1960s, appealed to Portlanders to keep demanding change.

He said continued street protests are the best option to put on the pressure to reform police departments across the country, including Portland. He also voiced his astonishment at how the movement to end police brutality against African Americans has now drawn so many white and diverse supporters from outside the black community.

Ford’s call out came as several thousand people marched from Revolution Hall, the former Washington High School in southeast Portland, to Northeast 15th and Alberta in the heart of Portland’s African American community.

It was the 11th straight night of massive protests in Portland, sparked by the May 25 death of George Floyd, a black man who died under police restraint in Minneapolis.

More than 100 people have been arrested in Portland since the protests began. Police say they have struggled to balance allowing thousands of peaceful protests to march and confronting much smaller crowds that seem focused on clashing with officers at any cost.