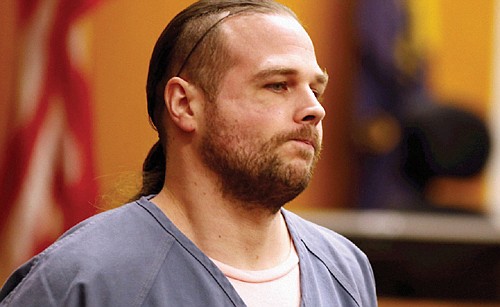 Sentencing for Jeremy Christian, the Portland man found guilty of fatally stabbing two white men on a Max light-rail train who tried to stop his racist threats against two young black women has been moved again, this time to Tuesday, June 23 in Multnomah County Circuit Court.

Much of the challenge will be in maintaining physical distancing during the sentencing hearing because of the number of victims, victims’ relatives, media and members of the public who are interested in witnessing the proceeding when distancing restrictions are in place because of the coronavirus pubic health crisis, court officials said on Friday.

A jury in February found Christian guilty of the deaths of Taliesin Namkai-Meche and Ricky Best. He also was convicted of attempted murder for stabbing survivor Micah Fletcher and assault and menacing for shouting slurs and throwing a bottle at Demetria Hester, a black woman on another light-rail train the day before the May 26, 2017, stabbings.

Sentencing in the case had been delayed several times and was tentatively scheduled for this week.