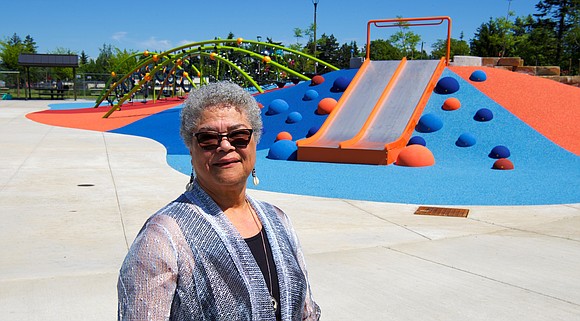 A newly redeveloped park in outer northeast Portland has been renamed to honor a late female leader from Portland’s historic African American community, and removes a previous moniker for the park that drew racist connotations. 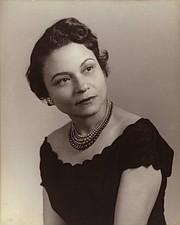 The green space and playground formerly known as Lynchview Park at 167th and Market Street will be called Verdell Burdine Rutherford Park. It honors Rutherford, a civil rights leader and historian who lived in Oregon from 1913 to 2001.

As president of the Portland chapter of the NAACP she helped pass the Public Accommodations Bill, also known as the Oregon Civil Rights Bill, which in 1953 outlawed discrimination in public places on the basis of “race, religion, color or national origin.”

The park was recently renovated with a new playground, picnic shelter, paved pathways, public art and a soccer field.

Renaming the park was a project kick-started by former City Commissioner Nick Fish, who directed a naming committee before his death in January. The committee was made up of nine local community members.

Portland Mayor Ted Wheeler announced the new name earlier this month amid the protests in response to the death of George Floyd, a black man killed by a white police officer in Minneapolis.

“I am honored to recognize Verdell Burdine Rutherford’s role as a leader and historian for the black community by selecting her name for the first Portland park named after a black woman,” said Wheeler.

The park was originally named for Patrick Lynch, who in the late 1800s donated land for the park and adjacent Patrick Lynch Elementary School, which still bears his name. Three other elementary schools named for the Lynch family were renamed in 2017.

At the time, Centennial School District Superintendent Paul Coakley said many newer families coming into the district associated the name with lynching, the killings of black Americans in America’s violent and racist past.

“Mom rightfully considered herself a local historian,” Verdell’s daughter, Charlotte Rutherford said in response to the park renaming. “She was a hardworking volunteer and community activist who did not seek the limelight, but she would have accepted this honor humbly, knowing that this park will provide a place for the community to gather together.”

Verdell Burdine Rutherford was born in Oklahoma in 1913 and moved with her family that same year to Oregon, who hoped who hoped to get farmland under the Enlarged Homestead Act of 1909. Upon arrival, they learned that black people were prohibited from owning free land in Oregon.

In 1936, Verdell married Otto Rutherford and settled in Portland. Together, they were leaders of the Oregon chapter of the NAACP, and oversaw one of the NAACP’s biggest victories – the passage of the Public Accommodations Act of 1953 which outlawed discrimination in public places on the basis of race, religion, or national origin.

In 2011, a decade after her passing, her daughter, Charlotte, gifted her historical collection of artifacts from Portland’s historical African American community to Portland State University. It remains accessible for academic research and public use as the late leader desired.

Due to public gathering restrictions during the COVID-19 pandemic, a community celebration at Verdell Burdine Rutherford Park will be held at a later date, officials said.