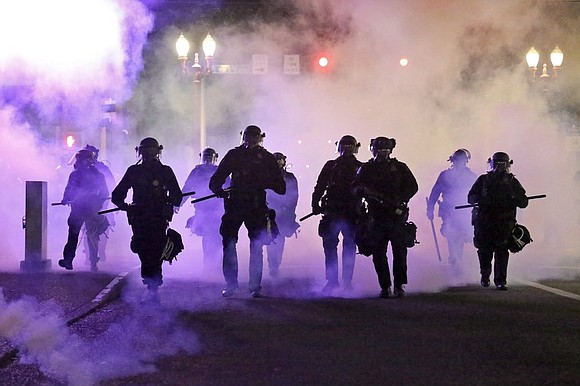 (AP) — The Mayor and Portland City Commissioners voted Wednesday to cut nearly $16 million from the police budget in response to concerns about use of force and racial injustice.

The cuts are part of a city budget approved by the commissioners with a 3-1 vote in a contentious meeting.

The money is saved in part by eliminating a gun reduction violence team, formally called the gang enforcement task force. In addition, monies for school resource police officers and transit division police will be redirected to social service programs.

Chloe Eudaly, the lone commissioner to vote no on the cuts, said they weren’t deep enough. The police budget had stood at about $245 million before the commission action.

Some protesters have demanded cuts of $50 million for police, but Commissioner Jo Ann Hardesty defended the smaller amount, saying the $50 million was not based on a specific analysis.

Hardesty worked for years to transform the Portland Police Bureau from the outside as an activist and was the first black woman on the City Commission when she was elected in 2019.

“What I know is that there are a lot of people taking to the street every night who have not before this month actually understood all the work that community and government has done,” said Hardesty, who proposed smaller cuts to police in last year’s budget that failed.

Thousands of protesters have filled the streets of Portland every night for three weeks following the death of George Floyd, a handcuffed black man who died after a white Minneapolis police officer pressed his knee on Floyd’s neck for nearly nine minutes.

Mayor Ted Wheeler also announced that Juneteenth will be a paid city holiday starting Friday. The date of June 19 is the oldest known celebration of the end of slavery in the U.S.