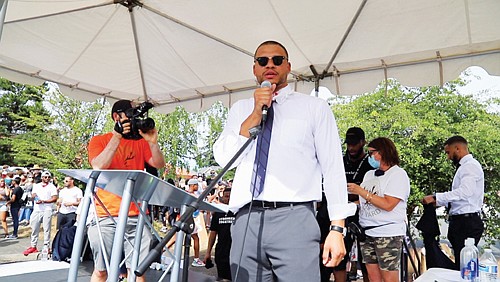 Brennan Scarlett, a former Central Catholic High School football standout and now a linebacker with the Houston Texans of the NFL, speaks out for racial justice on Friday, June 19 during a Black Lives Matter rally at Peninsula Park in observance of Juneteenth, In the wake of national and local protests over police brutality and racial injustice, Portland government leaders have declared Juneteenth a new annual paid holiday for city and county employees. Photo by Dj Willingham

Portland observed Juneteenth for the first time as an official holiday Friday and the day was celebrated by thousands of people who marched for racial justice in demonstrations against police brutality, protests that have continued almost daily in the city since the Memorial Day police custody death of George Floyd, a black man whose neck was pinned to the ground in Minneapolis for more than 8 minutes before he died.

At Peninsula Park in north Portland, a large group of young people gathered to celebrate black lives with speakers in a Juneteenth event organized by Malik Montgomery, a 22-year-old who grew up in the neighborhood and hosted with the help of the Big Yard Foundation, a nonprofit that supports community empowerment.

The speakers took to the stage to share their experiences and speak out for racial justice. Brennan Scarlett, a former Central Catholic football standout and now a linebacker with the Houston Texans of the NFL, called on the community to unify behind a peaceful message for change.

The group then marched down Martin Luther King Jr. Boulevard to King School Park as they chanted “Black Lives Matter.”

In another Juneteenth protest organized by young people, participants reflected on what the holiday and the Black Lives Matter movement means to them during a gathering at the Salmon Springs Fountain, downtown. Later, members of Portland’s interfaith community wrapped up the day with a prayer at Terry Schrunk Plaza, downtown.

Both the city of Portland and Multnomah County have made Juneteenth an official annual paid holiday for their employees, citing that this is a moment of reckoning for the history of anti-blackness and racism in Portland.

Last Wednesday, the Portland City Council voted unanimously to adopt Juneteenth as an annual Day of Remembrance and paid holiday.

“Since the death of George Floyd, thousands of people have reached out to my office demanding accountability and change,” Wheeler said. “Today’s ordinance and resolution are a direct result of our commitment to listen and respond to our community. This is not performative. This is our reality and it is our responsibility to resolve the brutality of the past.”

Multnomah County Chair Deborah Kafoury cited the historical systemic oppression of black people as the backdrop to her recent order to make Juneteenth an annual holiday for all county employees.

Although Juneteenth has been regularly celebrated by Multnomah County employees and community members as a day of commemoration, education and achievement, the chair’s designation places the day of observance alongside Independence Day, Memorial Day and Presidents’ Day in significance and impact.

“We have a profound responsibility at the county to acknowledge that the structural inequities in our community and country are rooted in the original enslavement of black people,’’ Kafoury said in a statement. “Observing the day of black liberation honors the historic and current struggle, acknowledges the strength of our black neighbors, friends and family, and reminds us of the hard and necessary work we must continue to dismantle systems of oppression.’’

Oregon Gov. Kate Brown on Thursday proclaimed June 19 as Juneteenth in Oregon and said she will introduce a bill in 2021 to make it a state holiday.

Juneteenth commemorates June 19, 1865, when the Union army brought word of the Emancipation Proclamation to enslaved people in Texas. It is celebrated as the end of slavery in the United States.