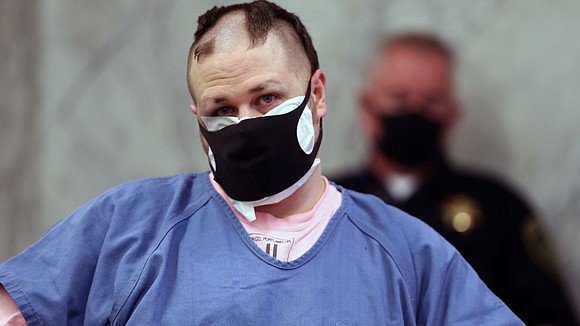 Jeremy Christian appears in court Tuesday for sentencing in his deadly attacks on a Max light rail train in 2017. The hearing was delayed when he was thrown out of court for going on a tirade against the first victim who spoke.

Sentencing for Jeremy Christian, the racist-spewing Max rider convicted of killing two men and injuring a third as they defended two black teenage girls he was verbally assaulting on a MAX light rail train in 2017 was delayed on Tuesday after Christian was thrown out of court for going on a tirade against the first victim who spoke.

Demetria Hester was testifying about her encounter with Christian the day before the fatal stabbings on a different Max train when he threatened to kill her for being a black woman and struck her in the eye with a bottle.

As Hester was making her victims statement, she told Christian “You are a waste of breath and when you die and go to hell, I hope you rot.” He then erupted out of his chair and started shouting profanity at her. The judge ordered him removed, and as he was whisked out of the courtroom by sheriff’s deputies, he yelled out to Hester, “I should have killed you!”

Multnomah County Judge Cheryl Albrecht told Christian he had been warned not to be disruptive and she would not allow him to return to the courtroom for the rest of the hearing. But after other witnesses indicted they wanted Christian to hear their victim testimonies, she allowed Christian to be connected by video only while seated in another room. That caused another delay.

Hester also spoke to the injustice against African American like herself, accusing the criminal justice system, police and the judge in the case of bias against people who are black, accommodating a white defendant rights to espouse white supremacy speech over the terror it causes.

Christian could be sentenced to life in prison with no chance of parole for the first degree murders of Taliesin Namkai-Meche, 23, and Ricky Best, 53. But defense attorneys say the judge can only hand him a life sentence with the possible of release after 30 years, claiming the law is unconstitutional and ignores past Supreme Court decisions.

Christian was found guilty earlier this year on 12 counts, including those murders and attempted murder, as well as assault and intimidation.

Sentencing was originally scheduled for March but was canceled and rescheduled due to the coronavirus pandemic. Only 19 people were in Judge Albrecht’s courtroom Tuesday in an effort to ensure physical distancing is maintained during the proceeding.

The sentencing hearing was scheduled to resume Wednesday morning.