Building will no longer be named for racist settler 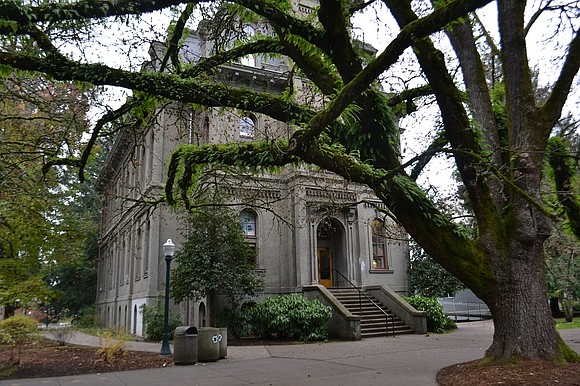 Deady Hall, a building at the University of Oregon named for an early white settler who supported slavery and who helped draft the state’s constitution which barred Black people from living in the territory, will be renamed in an acknowledgement of past racism, university officials announced Wednesday. (Photo courtesy Wikipedia Commons)

(AP) — A building at the University of Oregon will no longer be named for an early white settler who supported slavery and who helped draft the state’s constitution which barred Black people from living in the territory.

After years of pressure from student activists, the university’s board of trustees decided Tuesday to rename Deady Hall. The university’s first building, it was named for Matthew Deady, who was president of Oregon’s constitutional convention in 1857, a federal judge and leader of the university.

University President Michael Schill had commissioned a report on Deady in response to demands by students during a 2015 Black Lives Matter protest. The report, published in 2016, determined Deady was a racist.

Deady helped shape Oregon’s constitution that contained a clause prohibiting Black people from residing in Oregon. It was not repealed until 1927.

But Schill decided in 2017 not to rename the building. As a judge, Deady had spoken up for Chinese immigrants who faced persecution. Deady had also been president of what was then the University of Oregon’s board of regents.

During current nationwide protests in the wake of the death of George Floyd, Deady Hall was again a focus. On June 7, about 1,500 Black Lives Matter protesters marched to the building on the campus in Eugene.

The university said Wednesday on Twitter that the building will temporarily be called University Hall until a formal naming process the next school year.

“The protests in Eugene and across the globe demonstrate the need for us to acknowledge the death, pain and racism that has been inflicted on our Black brothers and sisters, and to commit ourselves to education, listening, action, as well as transformation,” Schill said.