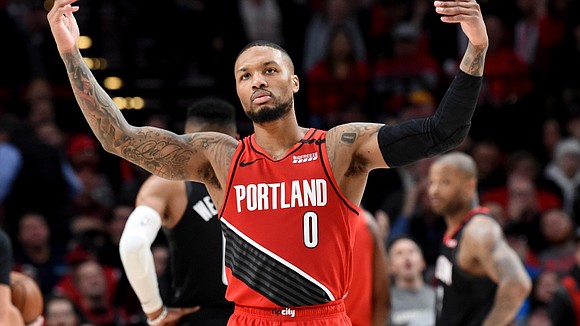 Portland Trail Blazers guard Damian Lillard urges on the crowd after scoring during an NBA basketball game against the Houston Rockets in Portland last Jan. 29. The Blazers won 125-112. (AP photo)

The Portland Trail Blazers are now scheduled to resume the 2019-20 season with a matchup against the Memphis Grizzlies on July 31 in Orlando. It comes after league play was disrupted by the coronavirus pandemic in March.

The NBA and the National Basketball Players Association finalized a comprehensive plan last week to restart to the season starting on July 30, which includes stringent health and safety protocols, a single-site campus at Walt Disney World Resort in Florida and the goal of taking collective action to combat systemic racism and promote social justice.

Under the format, the 22 participating teams will be the eight teams in each conference with the highest current winning percentages and the six teams, including Portland, that are currently within six games of the eighth seed in either conference.

The restart will begin with each participating team playing eight “seeding games” in Orlando, as selected from its remaining regular-season matchups. For the Trail Blazers, the games are scheduled July 31 vs. Memphis; Aug. 2 vs. Boston; Aug. 4 vs. Houston; Aug. 6 vs. Denver; Aug. 8 vs. the Los Angeles Clippers; Aug. 9 vs. Philadephia; Aug. 11 vs. Dallas; and Aug. 13 vs. Brooklyn.

All eight games will be televised by NBC Sports Northwest (NBCSNW) or national carriers and aired on the Trail Blazers radio network.

At the conclusion of the seeding games, the seven teams in each conference with the highest combined winning percentages across regular-season games and seeding games will be the first through seventh seeds for the NBA Playoffs for that conference.

If the team with the eighth-best combined winning percentage in a conference (Team 8) is four games or fewer ahead of the team with the ninth-best combined winning percentage in the same conference (Team 9), then those two teams would compete in a play-in tournament to determine the eighth playoff seed in the conference. The play-in tournament will be double elimination for Team 8 and single elimination for Team 9.

The NBA’s standard playoff tiebreaker procedures will be used to break any ties on the basis of winning percentage. Once the 16-team playoff field is set, the NBA Playoffs will proceed in a traditional conference-based format with four rounds and best-of-seven series in each round. The 2020 NBA Finals will end no later than Oct. 13, league officials said.