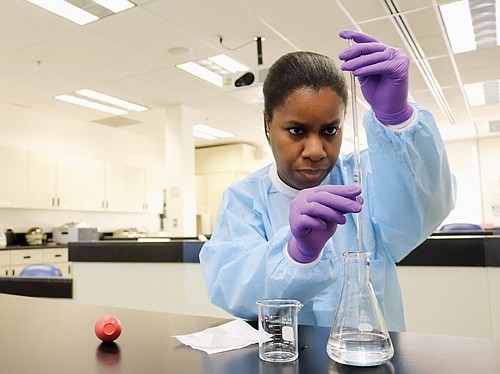 Allia Smith has a doctorate in microbiology and immunology from Dartmouth College, and she’s a student in Portland Community College’s Medical Laboratory Technology Program at the Cascade Campus in north Portland.

“The nice thing about the program is that it doesn’t matter what my academic background is,” Smith said of people who may think her PhD overshadows her studies at a community college. “What’s important is that you have the necessary prerequisites to enter the program and can build upon those skills.”

Medical lab technicians are the healthcare professionals who perform test procedures in the hospital clinical laboratory and are trained to work on complex lab instruments and information systems. Technicians play an increasingly important role in healthcare, running clinical tests required by physicians to make life-affecting decisions in patient care.

The move makes sense for Smith and many who are looking to train in this profession. The healthcare industry is experiencing a deficiency of trained medical lab personnel as job growth is expected to increase by 11 percent in the coming decade.

“We’re facing a critical shortage of workers,” said Dr. Teresa Wolfe, who serves as the chair of the program. “We need to replace the current workforce. In Oregon, there are always openings and a huge need that is just going to get worse.”

The program attracts a variety of people, from parents and older students to recent high school graduates. Smith, a parent herself, chose PCC’s program because it’s the only one of its kind in the state, and students have a 100-percent pass rate for the board licensing exam.

“It just kind of all fits together really nicely,” Smith said of the program benefits. “I can get more of a solid base of training here, and hopefully merge my two knowledge sets from my PhD and this program into an awesome career.”

In 2004, just shy of her 18th birthday, Smith and her two older sisters made the journey from the Caribbean island of Jamaica to the United States to take advantage of the American educational system. With a student visa secured, she was on her way to earning a bachelor’s degree in Microbiology at Agnes Scott College in Decatur, Ga., after flirting with a career in pharmacy.

After finishing at Agnes Scott, Smith enrolled at Dartmouth to study Microbiology and Immunology at the graduate level. After earning her doctorate, life offered another twist to her journey. Her husband, a process engineer, found a job in Oregon with Intel, and they moved to Portland where they welcomed the birth of their daughter a few years later. But Smith wanted to continue with her career.

Smith discovered the field of Medical Laboratory Technology as she searched for training options. In the fall of 2018, she enrolled at PCC and has rocketed through the program where she sports a perfect 4.0 grade point average.

She credits the hands-on simulation lab and the onsite clinical training with healthcare partners as being invaluable to her training. Eventually, she’d like to run her own medical lab operation.

“All of the teachers here have been great, and they all have clinical experience,” added Smith, who plans to graduate this spring. “There’s this clear understanding that regardless of what your background is, we’re all on equal footing when we start.”