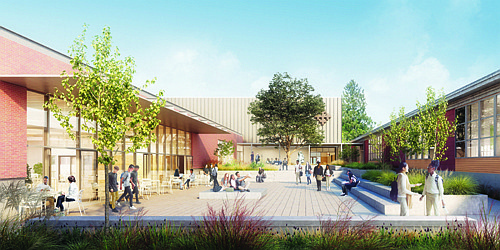 De La Salle North Catholic High School opened in north Portland in 2001 to provide a rigorous, faith-based education to diverse students from the Portland area who would not otherwise have access to a reliable college-preparatory education.

After losing its future lease of the former Kenton Elementary School from Portland Public Schools, the private school is updating its plans to build a permanent home at St. Charles Parish near the corner of Northeast 42nd and Killingsworth. It has hired Bora Architects to design the new school and has announced a capital campaign which has raised about 85 percent of its goal of $21.7 million to make the move possible.

The new school will include state-of-the art science labs, a visual arts center and a high school competition size gym.

De La Salle North doesn’t look like most Portland-area private schools: 39% of its enrollment is Hispanic, 34% is African American, and 11% is multiracial; just 7% is Caucasian. It has been identified as Oregon’s most diverse private school. Additionally, 92% of students receive financial aid, and 71% of students qualify for the Federal Free and/or Reduced Lunch Program.