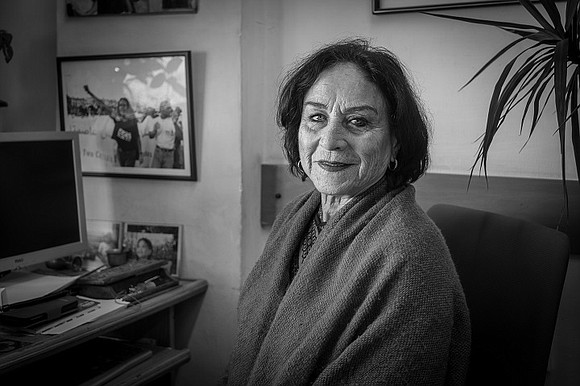 Editor's Note: The last four days of the Portland International Film Festival sponsored by the Northwest Film Center were canceled Thursday after Oregon Gov. Kate Brown ordered restrictions on gatherings of groups of more than 250 and closed schools to slow down the spread and impacts from the coronavirus. Online viewing is an option. Visit nwfilm.org for more information. These reviews were posted earlier:

As the Portland International Film Festival (PIFF) hits its midway point, I offer some suggestions for focusing your viewing time this week (or your later online viewing):

"Advocate" is my favorite of the festival so far. It's a documentary about Jewish-Israeli human rights lawyer Lea Tsemel who has devoted her career to defending Palestinians accused of plotting and executing attacks on Jews. Tsemel is a polarizing figure in Israel; the people she represents (including, as depicted here, a 13-year-old boy accused of participating in a knife attack and a young woman accused of planning a suicide attack) are immediately labeled terrorists in the media, and many people equate defending them to defending the devil. The film follows Tsemel through her handling of those two cases, in her office and at the courthouse, in meetings with clients and co-counsel. It also explores her history as a young activist and her relationships with her two grown children and her husband, an activist whom she has also had occasion to represent. What emerges is a compelling picture of a very consistent person; as a young woman, Tsemel came to understand clearly that as a Jew in Israel she is a member of a privileged class who inevitably benefits from oppression of the Palestinians, and determined that she would do whatever she could to stand against that oppression. The film's journey illuminates how that clarity helps Tsemel put into perspective the persistently long odds she faces in her work and the ways that the legal system is rigged against her clients. Her example has much to teach about the true meaning of solidarity.

A woman takes the pulse of a man in “The Fever,” a moving film that looks into the experiences of indigenous people in Brazil. The film plays again on Friday, March 13 as part of the Portland International Film Festival.

"The Fever" is a quiet but immersive look into the experience of indigenous people in Brazil. Director Maya Da-Rin, whose prior work has been in documentary films, builds her first feature film around the daily life of Justinio, a middle-aged man who has migrated to the city to work as a security guard overseeing the dispatch of shipping containers. We follow him on his long commute, witness the soul-deadening nature of his work and the racism of his co-workers, and his quiet relationship with the adult daughter who keeps house for him as she prepares to go to medical school in the distant capital city. The looming change in his circumstances that will accompany her departure coincides with a change in his Justinio's physical health; he develops an unexplained fever, as reports of an animal on the loose also stir his longing for the rainforest. In a way that befits her subject, Da-Rin builds this story more from observation than words, offering windows into the hidden depths of this man via his physical movements, his relationship with his daughter, and pivotal interactions with his older brother and sister-in-law who make a rare visit from the rainforest.

"Zana" is another standout first feature from a director who previously worked in documentary film. Director Antoneta Kastrati lost her mother and a sister in the Balkan wars and built this fictional film around one woman's experience of loss. Set in rural western Kosovo 10 years after the war, the film centers on Lume, who shares a farmhouse with her husband and mother-in-law. They are pressuring her to get help for infertility, suggesting that her husband might take a second wife and taking Lume to a local psychic and then to a faith healer. Their efforts are more deeply misdirected than one would guess, however, as it becomes clear that the couple had and lost a child in the war. With cinematography by Kastrati's sister Sevdije and employing many local Kosovar non-actors, this film is a moving exploration of grief and an absorbing window into Kosovar culture.

"Again Once Again" is another film worth catching during its festival run--and, again, a first feature by a woman director, Argentine actress Romina Paula, who stars in the film as a lightly fictionalized version of herself. The mother of a young son, she returns home to stay with her own mother when her relationship with the boy's father founders. While there, she reflects on where she fits into her family history, how being a mother has changed her, and what she really understands about herself and her hopes for her life. The ideas aren't ambitious and the story is slight, but wandering with this young woman offers some interesting windows into Argentine life and more broadly universal experiences of waking up in young adulthood.

"The Moneychanger" turns a wry focus on a particular Uruguayan grifter, and his somewhat joyless accumulation of ill-gotten wealth for two unregulated decades beginning in the 1950s. This particular era turns up a lot in Latin American films as an especially compromised period of military coups, government corruption, and rampant economic exploitation. The film isn't trying to illuminate that history directly, but is an interesting window into how Uruguay views itself; it's a world in which a not-particularly-cunning person with no moral compass like Humbert Brause (Daniel Hendler) can amass significant wealth with ridiculously little downside risk. The film is almost as joyless as its protagonist, but has the appeal of a slightly unsavory overheard conversation.