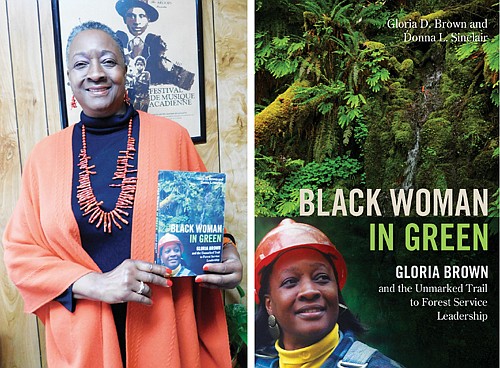 But all those experiences also gave her courage to face the future, and Brown was determined to forge ahead. After the incident at her daughter’s high school, Brown ended up sending her daughter back East to live with her parents to finish her senior year, and she was given a transfer to the regional office in Portland to work for the Willamette National Forest.

But Brown still wanted more. She wanted to become a Forest Service line officer, so she could make the decisions that were then only being made by white men, she said. So she found out about an opening in public affairs and applied for it, saying if selected, she would help them get their overdue Forest Plan published quickly. And once she did that, she said, she wanted a sabbatical to go to OSU to get training to become a forest ranger, the only track to becoming a line officer. It worked, and she became a forest ranger and was able to work out in the woods.

Brown went on to other assignments in the Northwest, including Mount St. Helens, and eventually reached the lofty position of being hired as Forest Supervisor of the 630,000-acre Siuslaw National Forest. It was both a shock and an unbelievable challenge, as she wrote.

“My position as forest supervisor was new territory not only for me, but also for the Forest Service,” she wrote. “We were betting on each other, and the stakes were high. I had watched and participated in the continued unfolding of Mount St. Helens’ ecological network, the flora and fauna that brought back an ecosystem. Just as wildlife, birds and sprouts of green reemerged on the once-barren landscape, I realized that I, too, had blossomed toward my new assignment. I knew that my dream job would present huge and unexpected challenges.”

Brown’s book is chockfull of anecdotes about the inner workings of the Forest Service and the many situations she has overcome, from the internal racism in her own family because of her dark skin, being raped at age 12, becoming a widow at a young age and experiences as varied as working to protect the California condor, promote women’s rights and standing up to white men who would keep her down.

She sums up her life in the Forest Service and her experience with racism in the book’s epilogue:

“My philosophy was that if you want to be successful as a black person in a white world, you were the one who had to make it work. That could mean educating white people or simply turning the other cheek. The reality is that many African Americans don’t make it past a single summer in the Forest Service, in part because the onus is always on them. But others do. I’d had to put aside my own feelings and push my way upward. My need to provide a decent life for my children and my own ambition had more power than the words of a few racists.”