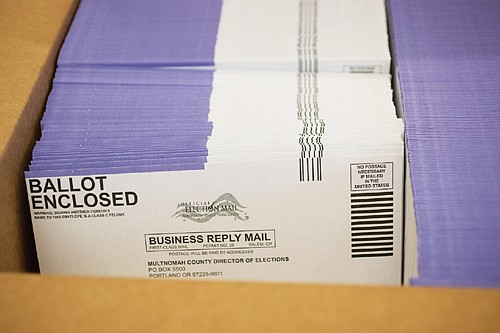 Ballots for the May 19 vote-by-mail election are out.

Voters in the May 19 Primary have a few days to mark their ballots in an important vote-by-mail election that will decide who wins many local offices outright or sends their campaigns into a runoff in November. In addition, two ballot measures face ratification and adoption with a simple majority.

In Portland, a diverse field of candidates faces votes with candidates of color and clearly liberal credentials running in all four contested races for seats on the Portland City Council, including mayor; an open position on the Oregon Circuit Court in Multnomah County; and contested positions for Metro Councilor and Oregon Secretary of State. The names of Joe Biden, Elizabeth Warren and Bernie Sanders will appear on the Democratic Primary Ballot for President, but Biden is already the presumed nominee after beating Sanders in recent contests and holding what political experts say is an insurmountable lead. Sanders and Warren have already conceded, but in some cases they can collect more delegates for the party convention.

A two-way race for Multnomah County District Attorney features Mike Schmidt, a former deputy DA and justice reform candidate who has won endorsements from civil rights and racial justice advocates versus Ethan O. Knight, another former deputy DA and assistant U.S. Attorney who has endorsements from a wide swath of the legal establishment, prosecutors, police and firefighters.

Two ballot measures face voters in Portland, a proposed city measure to renew a 10-cent per gallon fuel tax to pay for street repairs, maintenance and safety; and a proposed Metro tax on high incomes and business profits of over $5 million to pay for homeless services.

Ballots were mailed out from the Multnomah County Elections office in late April and must be returned to county election officials by 8 p.m. on Tuesday, May 19 in order to be counted. And for the first time, return postage will be paid thanks to a new state law by the Oregon Legislature. If ballots can’t be in the mail by Thursday, May 14 in order to arrive in time they should be dropped off at an official county elections drop boxes, according to elections officials.

In Portland, Mayor Ted Wheeler is running for a second term in a contest that drew 18 other candidates, including Teressa Raiford, a political activist from the African American community who started Don’t Shoot PDX to demand accountability for senseless gun deaths and has joined other Black Lives Matter activists to demand police reforms.

Mingus Mapps, a public policy consultant with deep roots in the black community is running against his former boss, City Commissioner Chloe Eudaly. The race has eight other candidates, including former Mayor Sam Adams, the first openly gay office holder in Portland whose term was embroiled by a sex scandal with an18-year-old intern. In another open position, nine candidates are running to replace retiring City Commissioner Amanda Fritz, including Isham “Ike” Harris, a black pastor and school bus driver and Carmon Rubio, the executive director of the Latino Network.

Loretta Smith, the former Multnomah Commissioner and long time member of Portland’s black community who worked for years in Sen. Ron Wyden’s office, once again seeks a seat in Portland city government, this time to complete the term of Portland City Commissioner Nick Fish who recently died in office. The special election comes two years after Smith finished second in a historic contest in which Jo Ann Hardesty was elected the first African American female on the Portland City Council.

Ernest “Ernie” Warren of Portland’s African American community is running for a rare open position on the Oregon Circuit Court for Multnomah County. Warren has 31 years of experience as a criminal defense attorney in Portland. He’s been endorsed by Multnomah County District Attorney Rod Underhill who is retiring at the end of his term.

For a position as Metro Councilor, black activist and former executive director of the Qcenter, Carmon Whitten, is running in a contested contest with four other candidates.

In a partisan contest for U.S. Congress representing the Portland area, Earl Blumenauer faces a challenge for the Democratic Party nomination from Albert Lee, a member of Portland’s black community and a former college dean.

State Rep. Tawna Sanchez, a member of Portland’s Native American community and director of Family Services at the NAYA Family Center in northeast Portland is running unopposed for re-election in the Democratic Primary. There is no Republican in the race.