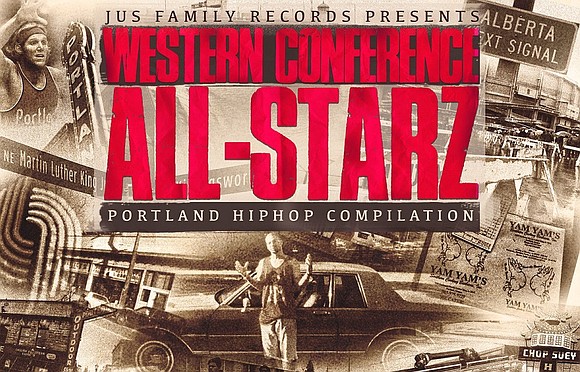 Over the year's Jus Family Records has made considerable contributions to urban culture in Portland with hip-hop and rap records featuring Bosko, Cool Nutz, Luni Coleone, Maniac Lok and more. But no other releases encompassed a thorough and concise representation of Portland hip-hop like the 1997 release "Western Conference All-Starz." The double CD captured a time when the hip-hop scene was growing and developing and featured a wealth of talent that represented exactly how dope and vibrant Portland's hip-hop scene was and still is.

The abundant audio landscape represented the lush sounds of Portland and every flavor of rap, a compilation that represents what made Portland the diverse and flavorful city that has bred many supremely talented, yet at times underrated hip-hop talents.

You can stream the historic album online by visiting youtube.com/playlist?list=OLAK5uy_n2To-V3c-kuPO49q8PA0U2ryfqr6IoQWY. “Western Conference All-Starz” is also available for purchase at coolnutz.bandcamp.com/album/western-conference-all-starz.