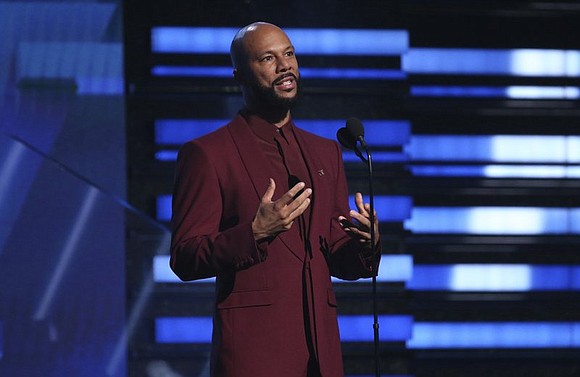 Common on stage during the Jan. 26 Grammy Awards in Los Angeles . The Academy Award-winning rapper and his criminal justice reform organization Imagine Justice has launched a campaign calling attention to the threat coronavirus poses on millions of people jailed or imprisoned in the U.S. (AP photo)

(AP) — Rapper and activist Common went into quarantine concerned about incarcerated people he has met during visits to jails, prisons and juvenile detention centers around the U.S. and who aren’t able to maintain social distance or adopt rigorous hygiene routines to prevent the spread of COVID-19.

“It’s a troubling time for them,” Common said, “because they are the people who usually are overlooked.”

On Wednesday, his criminal justice reform organization Imagine Justice launched a campaign with dozens of advocacy and activist groups calling attention to the threat that the coronavirus pandemic poses on millions of men, women and youths who are incarcerated in the U.S.

The campaign, dubbed #WeMatterToo, is urging authorities to immediately release people who have served the vast majority of their sentences, especially if they have underlying health conditions that put them at greater risk of severe illness or death from COVID-19. While some state and local correctional institutions have already released people from confinement due to the pandemic, supporters of the campaign also want governments to pay for testing and housing for inmates after they are released.

Common said he also hopes to create greater public awareness about what happens inside the nation’s jails and prisons and the impact that has on society.

“We all have unanswered questions about the pandemic,” the Grammy and Academy Award winning rapper said. “But being in prison adds new levels to that questioning, because of the way that people have been treated in prison.”

A two-minute video for the campaign features the voices of inmates who say jail officials are not providing protective equipment or requiring social distancing and have not regularly sanitized shower facilities.

COVID-19 outbreaks in jails and prisons around the country have caused alarm among advocates, who say inadequate mitigation protocol threatens both the lives of incarcerated people and correctional officers. Last month, the U.S. Bureau of Prisons released data that showed more than 70% of people in federal custody tested for COVID-19 were positive.

Similarly dire outbreaks have been reported in a handful of state-run correctional systems.

In Common’s hometown of Chicago, where the Cook County Jail is one of the nation’s largest jails, a federal judge last month ordered officials to ensure social distancing among the 4,000 people in custody. As of May 12, 161 inmates and 81 correctional officers were positive for COVID-19, according to the sheriff’s department. Many more inmates have tested positive but recovered. Seven inmates who have tested positive have died.

Guaranteeing prisoners’ safety during the pandemic is an issue of humanity, not politics, said Sam Lewis, executive director of the California-based Anti-Recidivism Coalition, one of nearly 65 partner organizations in the #WeMatterToo campaign.

“People have made mistakes that put them in jail,” said Lewis, a former life prisoner. “But that does not mean they should just die in those places. Accountability is not a death sentence.”

“Some of the strongest people I’ve ever met are in prison,” Common said. “I believe we can come out of this greater than we were before.”