But safety and distancing requirements continue 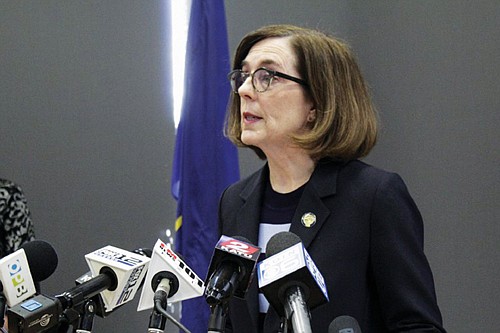 Oregon Gov. Kate Brown is allowing the vast majority of smaller cities and counties to reopen in a first phase of allowing businesses closed by the coronavirus pandemic to reopen under safe distancing requirements.

Oregon Gov. Kate Brown is allowing the vast majority of smaller cities and counties to reopen in a first phase of allowing businesses closed by the coronavirus pandemic to reopen under safe distancing requirements. Portland and the major population centers around the city expect to take similar actions over the next several days and weeks, officials said.

Under the phase one guidelines, restaurants and bars in approved counties can reopen for sit-down service if they maintain six feet of distance between customers, limit groups to a maximum of 10 people, and require employees to wear face masks.

Salons and other “personal services” can also reopen in all but the Portland area for now, but only if they screen clients and follow other protocols. That screening consists of asking the customer if they feel sick, even though the coronavirus can be transmitted by infected people who feel no symptoms.

Retail stores in Portland and across the state, regardless of whether they received phase one approval, can be open as long as they’re not in shopping malls or shopping centers and they limit the number of customers to maintain at least six feet of distance between people and employees in the store. The business must also post signs listing COVID-19 symptoms and frequently clean and sanitize work areas, high-traffic areas, and commonly touched surfaces, and require all employees to wear masks.

“In each of these counties, we will continue to monitor testing rates, effectiveness of contact tracing and isolation of the case, hospitalization rates and other metrics that are required to remain open during phase one,” Brown said Friday during a news conference. She hopes schools in the entire state can reopen in the fall.

The Oregon Supreme Court Monday stopped a rural judge’s order that would have tossed out all the statewide coronavirus restrictions.

A Baker County Circuit Judge had ruled earlier Monday that Brown erred by not seeking the Legislature’s approval to extend her stay-at-home orders beyond a 28-day limit. The opinion now awaits review by all the high court justices.

In a statement, Brown praised the Supreme Court action.

“There are no shortcuts for us to return to life as it was before this pandemic. Moving too quickly could return Oregon to the early days of this crisis, when we braced ourselves for hospitals to be overfilled,” she said.

Officials in Multnomah County, which covers Portland, have announced plans to hire contact tracers as required by the state to reopen. A week earlier Brown reported that Oregon was on track in meeting the goals that doctors and public health experts have laid out She said that means the state has “the opportunity to begin rebuilding a safe and strong Oregon.

“Thanks to millions of Oregonians following the strict physical distancing orders I put in place, I am happy to say these sacrifices have prevented as many as 70,000 COVID-19 infections, and 1,500 hospitalizations in Oregon,” Brown said.

By following the governor’s strict physical distancing guidelines over the past several weeks, Oregonians have successfully flattened the curve of COVID-19 cases. There are now fewer than 100 COVID-19 hospitalizations in the state, and Oregon has established plans for increasing testing capacity, expanding contact tracing capability, and building reserves of personal protective equipment.

Gov. Brown emphasized that by taking steps gradually and carefully, and following science and data, Oregon can begin to reopen safely.

"But let me be very clear: these choices are not easy; as we reopen parts of our economy, we know and expect that there may be an uptick in new coronavirus cases," Brown said. "That’s why we have to be prepared in every single corner of the state, because as we’ve seen, an outbreak can occur anywhere."

Gov. Brown’s new guidance on reopening also calls for the widespread use of face coverings, maintaining physical distance of six feet between individuals as much as possible, and following good hygiene and disinfection practices.

Large gatherings such as conventions, festivals, and major concerts and live audience sporting events will need to be cancelled at least through September, Brown said. Restarting events of this size will require a reliable treatment or prevention, like a vaccine, which is many months off, officials said. Further guidance on large events will be provided in the coming months.