Athletes Wary about Virus Upon Return 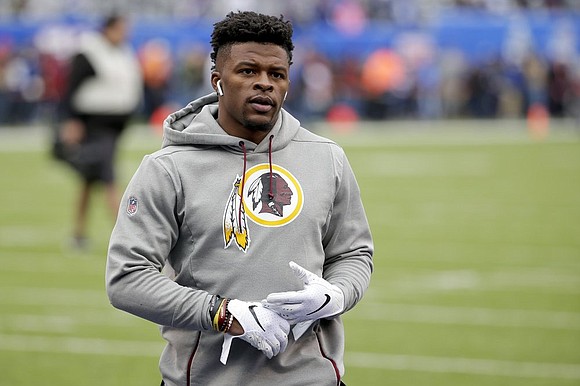 Running back Chris Thompson (25) warms up before an NFL football game in this Oct. 28, 2018 archive photo from AP. Thompson was one of more than two dozen athletes from around the globe who responded to questions from AP reporters on how concerned or confident they were about resuming competition. Thompson said keeping his 4-month-old daughter safe was his biggest worry. “If I go practice or play and I come back home with the virus, she’s not strong enough yet to fight something like that,” he said.

Ryan Zimmerman, a member of the World Series champion Washington Nationals, was adamant: “Someone is going to need to be able to assure us that the testing put forward will be able to catch this before it can cause some sort of outbreak among people in close quarters.”

Some wondered whether they would agree to get a seasonal flu shot if required, the way it was in Australian rugby. Two athletes said they never get seasonal flu vaccines — one also didn’t want recommended shots before a recent trip to Africa — and aren’t inclined to change that.

Others weren’t sure they would agree to get a COVID-19 vaccine if mandated by a league.

“I think it would stop at some sort of vaccine to play,” St. Louis Cardinals All-Star shortstop Paul DeJong said. “There is a fine line between what (MLB) can do to protect us and some things they can do to kind of exert power over us.”

For those in sports such as golf or tennis that require international travel, there are questions about how easy it will be to hop from country to country — and how easy it’ll be to avoid catching or spreading the virus.

“You are so concerned that you don’t want to be the cause of somebody else’s ... death,” said Padraig Harrington, a three-time major golf champion from Ireland. “Traveling, you have the fear that you are going to get it — and you still maintain that fear of passing it on to someone who is vulnerable.”

He mentioned his 80-year-old mother, but the list goes beyond athletes’ relatives: coaches, training staff, officials, arena workers and, if there are any, spectators. Plus those folks’ families.

“The pressure to ‘get back out there’ makes it clear,” Olympic long jump champion Tianna Bartoletta said, “that athletes aren’t necessarily being seen as the humans they are, with the families they have.”