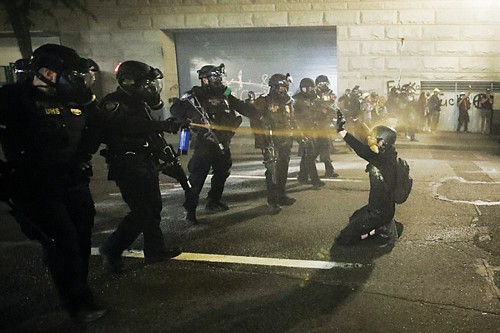 Federal Homeland Security officers use chemical weapons against protesters in Portland last August. A judge on Monday imposed restrictions to prohibit crowd control enforcement by federal police to more than one block from the U.S. Courthouse, downtown. (AP photo)

(AP) — Federal officers in downtown Portland must not engage in crowd control enforcement more than one square block from the Mark O. Hatfield United States Courthouse, under a federal judge’s court order.

U.S. District Judge Michael W. Mosman issued the restrictions Monday after granting a preliminary injunction Friday. He found that federal officers’ actions have chilled First Amendment’s rights of free speech and right to assembly for plaintiffs who sued the U.S. Department of Homeland Security and other federal law enforcement agencies.

“Within that sphere, called the ‘Excluded Area,’ federal law enforcement can engage in crowd control activities subject to all the pre-existing limits, constitutional or otherwise, on their conduct, but not covered by this injunction,” Mosman wrote. “Beyond that line, federal agents must cease crowd control activities, including clearing people away from the U.S. Courthouse.”

The judge underscored that federal agents “cannot individually target protesters in retaliation for their speech, anywhere or anytime.”

Mosman described the order as a “geographical solution,” that will provide protesters with a “zone of safety″ where they can peacefully protest.

The federal officers can make arrests or engage in “hot pursuits” of suspects within or outside the excluded area, according to established law, the judge wrote.

The plaintiffs are state Reps. Janelle S. Bynum, D-Clackamas, and Karin A. Power, D-Milwaukie, along with Portland lawyer and legal observer Sara D. Eddie, the First Unitarian Church of Portland and Western States Center, an organization that monitors right-wing extremism.

The judge found that tweets by President Donald Trump during the last few months helped incite improper conduct by federal officers responding to protests against police brutality and systemic racism in Portland and directed both sides in the lawsuit to hash out “rules of engagement” for the officers near the federal courthouse.

The plaintiffs sued Homeland Security, the U.S. Marshals Service, the Federal Protective Service and U.S. Customs and Immigration Enforcement, saying the aggressive dispersal of protesters by federal agents outside the courthouse this summer encroached on state powers and breached the First Amendment by interfering with the right to protest.

Mosman, however, rejected the claim that the federal officers violated the 10th Amendment’s separation of powers.