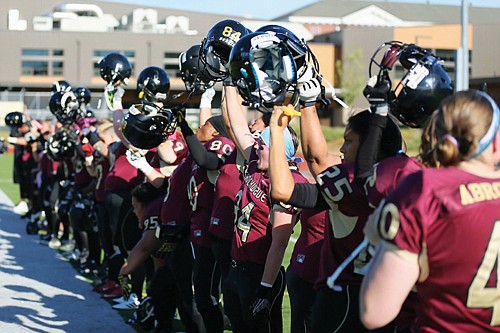 Women's tackle football, a diverse team of players and coaches based in Portland, has been playing since 2002. Called the Portland Fighting Shockwave, they play in the Women's Football Alliance, the largest women football league in the world. Practices are at the Moore Street Salvation Army field in north Portland. Photo by Scott Larson/Courtesy Portland Fighting Shockwave

Yes, Portland has an all-women tackle football team, and they are called the Portland Fighting Shockwave. The diverse team of players and coaches was formed back in 2002, and they play in the Women Football Alliance, which is the largest women’s football league in the world, with over 60 teams through-out the USA and Canada.

The players are all 18 or older and also have day jobs. They do not get paid; instead they play football for the passion and being part of a team. And no, they do not play in lingerie; they play in full uniforms and pads just like the men do.

Same as everyone else, the Fighting Shockwave were hit hard by COVID-19. They had to cancel their entire 2020 season due to the pandemic. Thus, they did not have any income from ticket sales or fundraisers and missed the opportunity to get their name out to the public and continue to build their brand.

The Fighting Shockwave were working with the media months before the pandemic hit to build their brand, but the health crisis really put a damper on all their efforts, really hurting a team that already lacks resources and name recognition.

The Fighting Shockwave don’t have the have deep pockets and name recognition such as the Trail Blazers. They have to rely on volunteers and constantly hitting the pavement on their own to get their name out there.

The biggest disappointment, for the players, however, wasn’t the lost efforts of their media work but, as owner Rebecca Brisson said, “That they could not play together as a team and missed out on the game-day experiences a season brings. These ladies were practicing three times a week. Then had it all taken away from them. It was really heartbreaking. Especially for the rookies that were so excited to take the field for the first time.”

Now the team is hoping the pandemic comes under control in the coming months to make way for a 2021 season.

As part of the WFA’s National Tryout Day, presented by one of the league’s biggest sponsors, Xenith, the Portland Fighting Shockwave will be having tryouts on Saturday, Nov. 7 at The Salvation Army Moore Street Chiang Memorial Field at 5325 N. Williams Ave.

Each participant will receive a free Xenith gym sack. The players must be females 18 or older, are encouraged to wear masks and should have football passion. Upon arrival, they need to sign a COVID waiver, and undergo a non-contact temperature check. For more information about the tryout and how to pre-register, visit portlandfightingshockwave.com/.

Team officials say you do not need any previous experiences, just a readiness to learn, a willingness to work hard, and a desire to be part of a team. Any woman is welcome no matter their race, religion, nationality, sexual orientation or sexual identity. Also, feel free to check out the team’s Facebook page at facebook.com/PortlandFightingShockwave.