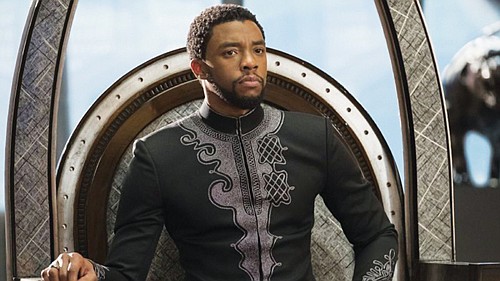 “Is this your King!” screams Killmonger, played by Michael B. Jordan in the Marvel Blackbuster “Black Panther,” as he anti-heroically lifts T’Challa – aka the Black Panther – played by Chadwick Boseman, above his head before depositing him into the a flowing river, seemingly plunging T’Challa to his death and simultaneously claiming the fictitious Wakandan Kingdom as his own.

Watching the cinematic artistry unfold, it is an oddly positioned move, as the movie’s namesake - Black Panther - is seemingly dispensed of callously, easily and early into the film. And as disheartening as this is to see, you know that the greatness of “The Black Panther” is yet to come. Even if you’re unsure of how it will happen.

Life and art seem to imitate each other. And much like the character he portrayed on screen, Chadwick Boseman was a king among men… a superhero…. a living legend, who even upon his celestial entrance, remains an ever looming and larger figure. Stories of his actions, his class, indeed his Kingly manner, are being ever revealed, all while we reflect on his life.

And if there is one thing that is clear, Chadwick Boseman, the man, displayed kingly ‘tenets’, which were brilliantly activated in his portrayal of T’Challa. These tenets, which we at Black Male Achievement Portland have noticed, align parallel to our own mission, vision, and values, are guides to leadership that we feel are great to outline.

From the beginning of the film, Black excellence is steeped in big ideas, big dreams and both the physical and artistic representation of just that, a larger than present life idea of the future. We see these dreams manifested in everything from the description of the city and its potential ability to help the world, to how each of the characters defines redemption, even amidst mistakes.

You witness the inevitability of their dreams, fueling and driving their responses to tragedy as they formulate a plan predicated on bold and big moves. It is that plan which ultimately protects them such that the harm of seeing T’Challa tossed over a cliff, does not become the trauma that would continuously disconnect them. And even those ideas are infused by dreams of the ancestors, dreams of a unified people, and the larger dream of peace. These dreams inspired both seasoned and rookie; both young and old. We are reminded to dream big, together.

Over the course of the movie, you see various characters shrink in the face of strong internal or external opposition or challenge. From facing the fear of shame in losing one’s ancestral position, to the forced removal and migration of the ‘royal’ family, the plot is synonymous with the plight many have experienced; having to face embarrassment, shame, and sometimes even complacency that leads to a Shakespearean type of tragedy - often related to one’s own hubris or actions.

Wakanda is fictitious. But the portrayal of this country, the energy behind the origination of the need for a safe and valued space, the association to a homeland that is both hidden, and open to those of historical heritage – is not. It speaks to the heart of many of us who are Black. The idea of a Wakandan country represents the dash between the words African and American – safely cultivating a vision connected to something many of us can never know, and yet desperately hope to hold.

With excellent storytelling, Black Panther explored the Black brilliance that is usually missing in cinematic endeavors. Visually relaying a juxtaposition that shows a deep analysis, and a reverence – through the experience of T’Challa, Killmonger, and the entire cast- of brilliance. From the digital inscription under Killmonger’s lip identifying him as uniquely Wakandan, to his ever present desire to escape and connect with his ancestral homeland; to T’Challa’s inner exploration of his homeland and the intertie with each of the independent tribes that made up the country; the story laid out the foundation of why dispersion does not eliminate the deep seeded connection, and the reverence to home. We are reminded that through it all, connection is critical, and we say “Wakanda forever!”

There is a historic phrase used when transitioning inherited power in a Kingdom which states “The King is dead. Long live the King.” Centered around the idea of staying deeply connected with intentional efforts and passing on leadership, opportunities, and ensuring stability, legacies serve a critical purpose; providing authentic connectivity and pre-determined value. In that sense we all have a legacy to live and to lead.

In an especially moving moment T’challa challenges the thoughts of his Uncle Zuri, played by Forest Whittaker, as to why his cousin, who is a living symbol of the Black Power movement, was not brought home.

T’Challa asserts that home is where Killmonger belonged no matter how his existence came to be. The theme of this conversation between an uncle and his woke nephew is a connected legacy, and how the interruption of that legacy led to the adversity they now faced. When you are Wakandan, you have a right flowing from the moment you draw your first breath: a birthright. That birthright is the legacy, and that legacy is the future.

This is especially acute for Black Male Achievement. Our efforts and intentions are focused on providing pipelines for young black men who are deeply connected and productive human beings in this community, and every community they touch.

We are reminded our legacy is our future. The obviousness of this tenet can be lost in the title character being male. But from the army general and captain of the king’s guard, to the chief spy, to the elder tribal head and leadership, to the chief scientist, women in leadership is not an “add-on” but central to the success of the Wakandan nation. This is what liberation looks like- via cinematic representation.

Valliant and brave. Thoughtful and kind. Intentional and strategic. Bucking the stereotypical trends; Black Panther sheds light on Black women in the way we know they truly are; whole persons who thrive in leadership.

As such the movie is a unique find; It passes the Bechdel Test. Tokenizing none, women are shown disagreeing, acting independently and without permission, crafting strategy- and fighting for what they love, and the love being something greater than any man. We see our sisters naming that greater love; their ancestors, their higher power, and their country. In all cases a Kingdom co-exists simultaneously as a Queendom opening space for endless possibilities as to how Black people can share power across genders to reach our goals.

We’re reminded of opportunities denied that must be fixed for our collective success; The women shall lead.

The five central tenets of Black Panther taught us that even in fiction, you can dream big, inspire rising to challenges, create a sense of home for those who longingly ache for one, demonstrate why legacies are important, and remind us the Women have always been leaders.

Chadwick Boseman, you were once king, you will forever be king. May you be welcomed with open arms to your eternal rest as we posthumously induct you into the Portland Chapter of Black Male Achievement.