'We Know We Have a Future Here'

Casons serves up a legacy of quality 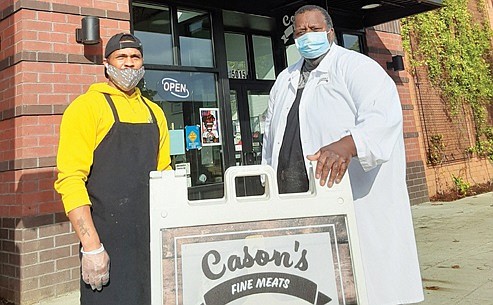 The owner of the self-titled “Cason’s Fine Meats” took a leap of faith, relocating his Kenton neighborhood-favorite business to the newly built Alberta Commons retail space last year. The plaza, an effort to bring Black-centered commerce back into the heart of Northeast Portland, is anchored by a mix of small and large retailers including Champions Barbershop, greenHaus Boutique and Gallery, as well as Wingstop and Natural Grocers among others.

High quality products draw customers old and new to Cason’s Fine Meats, a Black-owned business that has cemented new ties to the community from its new location at the intersection Northeast Martin Luther King Jr. Boulevard and Alberta Street.

Despite the coronavirus, which has shuttered dozens of businesses throughout the city in recent months, Cason says after in his new location that business has been “decent.”

“The community’s been real supportive,” he says, noting that a majority of his Kenton customers have followed him up to his new location at the busy corner of Martin Luther King Boulevard and Alberta Street. “We know that we have a future here.”

Cason, and some of the other smaller retailers struck 10-year leases with Prosper Portland, the city’s development agency as part of their effort they say s to keep more Black businesses in the area which has been upended by decades of racist policies, many being their own. In 2014, the long-vacant lot, became a focal point in the war against gentrification after advocates from Portland African American Leadership Forum cried foul when Prosper Portland (then Portland Development Commission) sold the land for well-under market value to an out of state developer set to bring Trader Joe’s to the area.

A sample of the wide variety of high quality products and services available at Cason’s Fine Meats are advertised on the walls of legacy Black-owned business, now one year in at a new location at Alberta Commons in the heart of Northeast Portland.

After the pushback made national headlines, Trader Joe’s backed out of the deal, mayor Charlie Hales earmarked new monies for affordable housing in the area, and new plans were drafted for the site.

A half-decade and many conversations later, stands Cason — and he’s ready to feed you.

His locally-sourced meats which include hard-to-find Southern staples such as oxtails and neck bones, along with more traditional meats such as country style ribs and sausage links are all anti-biotic and chemical free — a source of pride for the journeyman butcher.

A near four-decade vet of the meat-industry, he says he understands the budgetary constraints on some of the community that forces them to larger retail chains for what he calls cheaper, and “lesser cuts”.

“People that want a good product, they understand that, ‘I want something good and healthy for me’,” he says. While he recognizes that his price points may be out of reach for some, especially for some in the Black community, he says he hopes they recognize the value they are receiving in exchange.

And he has sights set beyond MLK and Alberta. Cason dreams of expanding out into “the Numbers” out in East County or even hopping the river over into Vancouver. “We’re spread all around now, and some of the things that we [traditionally] eat are not in some of those other places,” he states.

Celebrating a year in his new space, while in a year marred by a global pandemic, historic wildfires up and down the West Coast, and unprecedented Black uprisings is not lost on him.

Between the protests on the streets in particular, and a brand new sign outside the storefront, he says there’s been an uptick in hungry customers of all backgrounds funneling through his doors. And while a late May demonstration saw Cason’s front window tagged with some graffiti, he urges people to “keep marching” nonviolently.

And as he rounds out a year at his new location, one marred by uncertainty, Cason’s vision for the future remains as clear-eyed as ever — for him, this is about legacy.

“I’ve got grandbabies, sons, nephews, and I’ve got family that’s coming up behind me and to be able to ride up and down [MLK and Alberta] and see their name, it means a lot.”