Statutes Fall in ‘Day of Rage’ 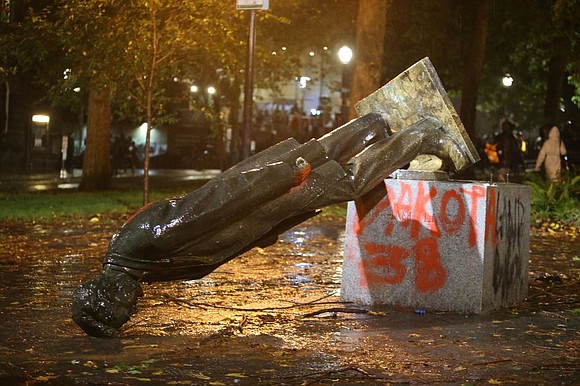 A statute of President Abraham Lincoln in the downtown Park Blocks was toppled Sunday night by protesters who began vandalizing the streets during an event they dubbed an “Indigenous Peoples Day of Rage,’ one day before the designated Columbus Day federal holiday. Another statute of President Theodore Roosevelt nearby was also torn down and windows were broken at the Oregon Historical Society and at the public safety office at Portland State University. (AP photo)

(AP) — Protesters overturned statues of former Presidents Theodore Roosevelt and Abraham Lincoln in downtown Portland on Sunday night in a declaration of “rage” toward Columbus Day.

The group threw chains around Roosevelt’s statue, officially titled “Theodore Roosevelt, Rough Rider.” They threw red paint on the monument and began using a blowtorch on the statue’s base, news outlets reported.

The crowd pulled down the statue just before 9 p.m. The group later turned their attention toward Lincoln’s statue, pulling it down about eight minutes later.

Historians have said Roosevelt expressed hostility toward Native Americans, once saying: “I don’t go so far as to think that the only good Indians are dead Indians, but I believe nine out of every 10 are ...”

Protesters spray-painted “Dakota 38” on the base of Lincoln’s statue, referencing the 38 Dakota men Lincoln approved to have hanged after the men were involved in a violent conflict with white settlers in Minnesota.

After toppling the statues, the crowd began smashing windows at the Oregon Historical Society and later moved onto the Portland State University Campus Public Safety office where windows were broken. Widows were also broken at a jewelry store, coffee shop, bank and phone store, police said. A restaurant in the 1400 block of Southwest Park Avenue had at least two bullets fired through the front windows, which lodged in the back wall.

Police declared the event a riot and ordered the group to disperse. Police made targeted arrests, including one for breaking numerous windows, and including the driver of a vehicle that was used to pull over one of the statutes, and a person involved in an assault, police said. More arrests and charges are possible.