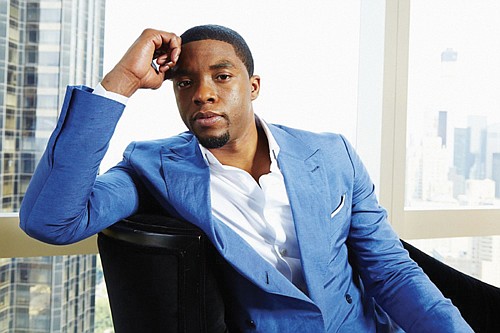 Actor Chadwick Boseman poses for a portrait in 2014. Boseman, who played Black icons Jackie Robinson and James Brown before finding fame as the regal Black Panther in the Marvel cinematic universe, has died of cancer. He was 43. (AP photo)

(AP) — First Chadwick Boseman slipped on the cleats of Jackie Robinson, then the Godfather of Soul’s dancing shoes, portraying both Black American icons with a searing intensity that commanded respect. When the former playwright suited up as Black Panther, he brought cool intellectual gravitas to the Marvel superhero whose “Wakanda forever!” salute reverberated wirldwide.

As his Hollywood career boomed, though, Boseman was privately undergoing “countless surgeries and chemotherapy” to battle colon cancer, his family said in a statement announcing his death at age 43 on Friday. He’d been diagnosed at stage 3 in 2016 but never spoke publicly about it.

The cancer was there when his character T’Challa visited the ancestors’ “astral plane” in poignant scenes from the Oscar-nominated “Black Panther,” there when he first became a producer on the action thriller “21 Bridges,” and there last summer when he shot an adaptation of a play by his hero August Wilson. It was there when he played a radical Black leader — seen only in flashbacks and visions — whose death is mourned by Vietnam War comrades-in-arms in Spike Lee’s “Da 5 Bloods.”

“A true fighter, Chadwick persevered through it all, and brought you many of the films you have come to love so much,” his family said.

Born and raised in South Carolina, where he played Little League baseball and AAU basketball, Boseman graduated from Howard University in Washington, D.C. He wrote plays, acted and directed in theater and had small roles in television before landing his breakthrough role.