Crews deployed to region and state 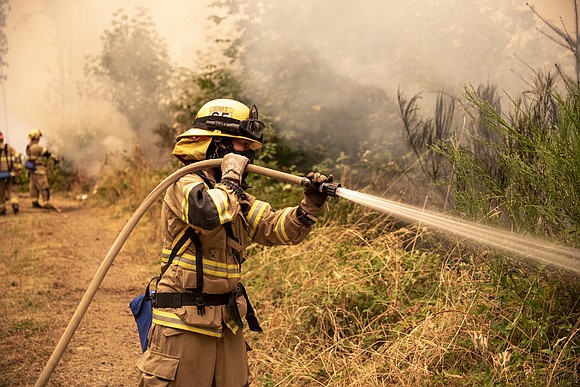 Tualatin Valley Fire and Rescue crews battle the Chehalem Mountain-Bald Peak fire in Washington County, southwest of Portland Wednesday. The Portland Fire and Rescue bureau said it is assisting fire departments fighting wildfires in the region and around the state, while also responding to over 500 fire calls over three days. Photo courtesy Tualatin Fire and Rescue.

As red flag weather conditions descended on Portland in recent days and sparked unprecedented multiple wildfires around the region, Portland Fire & Rescue has responded to over 500 fire calls locally and are assisting fire crews in other cities and communities nearby and around the state.

From downed power lines to trees crashing into cars and buildings to wind-stoked fires, Portland firefighters are working around the clock to keep Portland safe, officials said. Since Monday, the bureau said it has responded to over 500 fire calls while in the previous three days they responded to 152 calls.

Portland firefighters who are part of Incident Command Teams overseen by the Oregon Fire Marshal’s Office have already been deployed around the state to work on wildfires. Task forces were created to address the immediate needs in our neighboring counties that are fighting multiple wildfires requiring evacuations. 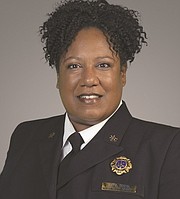 As multiple wildfires in extremely dry conditions tax fire crews and endanger lives across the region and state, Portland Fire Chief Sara Boone said the city is supplying as much mutual aid as it can while still protecting Portland.

Portland Fire Chief Sara Boone said the city is supplying as much mutual aid as it can while still protecting Portland. To date, 34 Portland Fire & Rescue firefighters have been deployed around the state and we have put five fire engines, one water tender, and one brush unit on the road to assist Clackamas County and Medford in their wildfire fight.

“This is an unprecedented fire event affecting our state and it requires all of us to work together as a community,” Boone said.. “Thank you to our firefighters who left their homes to combat these wildfires that are destroying lives and property across Oregon. I want to recognize that many City of Portland employees, including firefighters, have been forced to evacuate their homes and are experiencing loss. I am asking every single person in Portland to do their part to prevent fires in the city.”

Fire staffing in the state is stretched thin and it is of the upmost importance that Portlanders take extreme preventative measures to make sure no fires are started, officials said. Some suggested measures you can take to protect your families and the community:

Do not BBQ or create outdoor fires during this dangerous period; Do not smoke outside and make sure inside cigarette butts are extinguished fully in a non-combustible ashtray; Do not use any machinery that creates sparks outside; If you live next to a natural area, you should provide firefighters with the defensible space they need to protect your home. Create a buffer zone by removing weeds, brush and other vegetation. This helps keep the fire away from your home and reduces the risk from flying embers; Be aware, if you see a fire, no matter how small, call 9-1-1.