Fighting to Save the World

A brilliant performance in sci-fi thriller 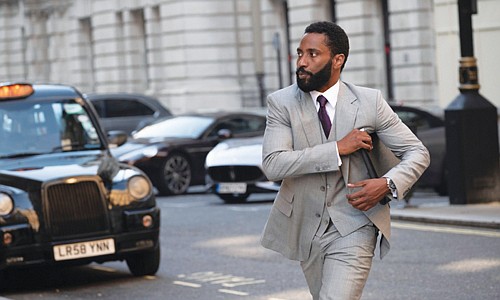 Warner Bros delayed the release of Tenet during the coronavirus pandemic until it could open it in theaters. It was a wise decision. The film belongs on a big screen. In fact, for maximum effect, viewers should consider experiencing the movie in an IMAX theater. But where theaters are still closed, like Portland, the film will roll out in days and weeks to come.

Director/writer Christopher Nolan is nearly unequaled when it comes to giving audiences unimaginable, spellbinding visuals: The Dark Knight, Inception, Dunkirk. He filmed Tenet in 70mm and IMAX, giving audiences a chance for a big picture adventure. Regular screens and TV’s can’t do justice to the international espionage, sci-fi trickery and devious mayhem that unravels across seven countries. Go big and the visuals will make your head spin.

The film has a sinister group of commandos taking over an opera house, holding the audience hostage and preparing to blow up the place. A counter group of combatants intervenes. One of the potential saviors is known simply as the Protagonist (John David Washington, BlacKkKlansman). As he tries to thwart mass murder, he notices a curious event: A hole in the side of a seat seems to refill itself with debris.

At first, it seems like a minor occurrence. Then he realizes that the hole is an example of a bizarre force. A reversing of the flow of time. Like a bullet reentering a chamber after it’s been shot from a gun. In the wrong hands, it’s a power that can become lethal.

John David Washington has crossed a bridge. He’s no longer just the son of a superstar actor. He is a superstar actor. Seconds after he’s on screen, you get the deal. He is as confident, adventurous and acrobatic as Tom Cruise in the Mission Impossible series. As cool and debonair as any of the Bond men. As his character becomes more poised and powerful, you become more assured that you are watching the blossoming of an actor who can dominate scenes that should have been stolen by veterans like Kenneth Branagh and Michael Caine.

As a director, Christopher Nolan is both an artist and a visionary. He brings a flow, choreography and timing to the film that is like an engineer building a race car. His scriptwriting is innovative too. The film’s ability to wrangle the most absurd or obtuse notions of physics into a plausible plotline is amazing.

Some movie fans are still skeptical about venturing into a theater to see gems like Tenet. Those fears are basic survival instincts kicking in during a very unpredictable pandemic. That said, the ideal way to watch Christopher Nolan’s extraordinary but flawed sci-fi/action/thriller and John David Washington’s brilliant performance is on a screen the size of the Titanic.

Dwight Brown is a film critic for the National Newspaper Publishers Association, the Black Press USA.