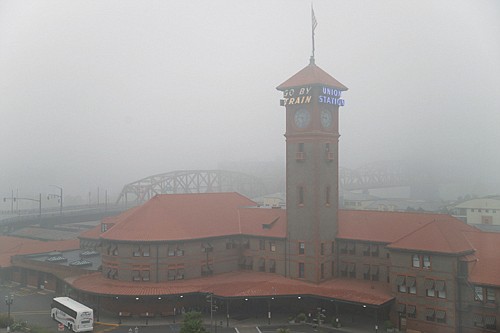 A view of smoky Portland from Union Station, downtown. The Portland metropolitan region remains under a thick blanket of smog from wildfires that are burning around the state and residents are being advised to remain indoors due to hazardous air quality. Motoya Nakamura/Multnomah County

Very unhealthy air quality conditions are expected to last at least until the end of the week and possibility until next week because of dense smoke coming from massive wildfires in Oregon and across the West, officials declared Tuesday.

The extreme high winds, heat and dry conditions that gave rise to some of the worst wildfires in Oregon history finally abated as the week began, giving relief to fire crews, but the fires are still burning and the risks to human populations continue, including from smoke. At least eight people have been killed by wildfires in Oregon since they erupted last week and more than 20 people are still missing

The Portland area has been under a dense smoke advisory for several days and an air quality advisory is in effect at least until Thursday.

Tyler Kranz, a meteorologist at Portland’s National Weather Service office, said for the smoke to disperse Oregon will need strong enough winds blowing from the ocean towards land — but there needs to be a “perfect balance” of wind so that it disperses smoke but doesn’t further ignite fires.

“We need the winds to get the smoke out of here,” Kranz said. “We just don’t want them to be too strong, because then they could fan those flames and all of a sudden those fires are spreading again.”

Smoke particles are small enough that they can penetrate deep into the lungs, and health effects can include chest pain, arrhythmia and bronchitis. Those with preexisting conditions such as heart and lung disease or asthma are especially at risk.

Dr. Gopal Allada, OHSU physician, says its critical for people to limit their exposure outdoors because of the smoke from wildfires.

According to health experts, the best prescription for avoiding wildfire smoke is to stay inside.

Dr. Gopal Allada, associate professor of medicine in the OHSU School of Medicine, warns that the cloth masks people have been wearing to prevent spread of the coronavirus are insufficient for wildfire smoke and may give false sense of security.

He said wearing a cloth mask outside won’t sufficiently protect people from the microscopic particulate matter that comes from wildfire smoke. If people have access to a N95 mask, they have the gold standard for protection, but those are in short supply because of the COVID-19 pandemic.

It’s therefore critical for people to limit their exposure outdoors, he said.

The poor air quality has led to the closure of government buildings and offices in Multnomah County and residential services have been scaled back.

The city of Portland has closed all city-owned outdoor areas and natural spaces including city parks until at least Sept. 24 because of the hazardous conditions. Portland residential garbage, recycling and compost collection was delayed this week due to air quality, and Meals on wheels canceled meal deliveries. Staff made wellness calls to all homebound participants.

“We want to ensure the safety of both our clients and volunteers, said Meals on Wheels People Executive Director Suzanne Washington. “All of our meal recipients have been receiving supplement food since the beginning of the pandemic in case of an event like this. We will call all of them to ensure they are safe and remind to eat one of the meals we provided.”

In response to massive wildfires across Oregon and near urban centers, Oregon Gov. Kate Brown tours the Oregon State Fairgrounds in Salem Saturday where she spoke with firefighting volunteers and evacuees. (AP photo)

Emergency smoke shelters have been set up at the Oregon Convention Center and the Charles Jordan Community Center in north Portland. Individuals and families seeking shelter were urged to call 2-1-1 or visit 211info.org.