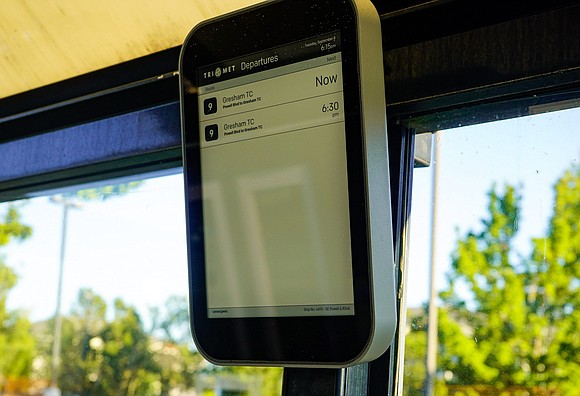 A new electronic display attached to a bus shelter shows departure times for the Line 9-Powell Boulevard bus. The solar-powered device relays real-time information about the locations of buses and MAX trains directly to the screen. Photo courtesy TriMet

TriMet is bringing new electronic digital information displays to bus stops and transit centers served by multiple bus lines and used by a large number of riders. The new technology also comes as the transit agency will begin to accept cash fares on buses once again.

TriMet suspended cash fares on buses on March 26 for the safety of bus operators and riders to limit the time they are close to each other while boarding the bus during the COVID-19 pandemic. Now that TriMet has a number of safety measures in place—a mask requirement, on-board limits and physical distancing, hand sanitizer dispensers and soon a safety panel next to the operator’s seat on nearly all our buses—it says it will once again accept cash on buses starting Thursday, Oct 1.

The effort to provide new digital displays at more than 80 bus stops and transit centers will rely on technology similar in size and technology to the e-reader or tablet you use at home. The screens are high-resolution black-and-white and show arrival times, information about stop closures, delays and detours.

The first of the 13-inch ePaper displays—so-called because they mimic the appearance of ink on paper with minimal glare—went up at the Beaverton Transit Center in spring as TriMet tested the technology. The agency will be installing the solar-powered digital displays throughout the transit system this year— with more still to come, officials said.

Because the screens are powered by solar energy, they don’t require a power source or fiber optic cable, allowing TriMet to install more of them at bus stops than it could with older technology that needed a hard-wired power source. The on-screen information is updated once per minute, giving riders real-time arrivals and service alerts.

The information displayed is managed by a single cloud-based content management system capable of running on multiple platforms. TriMet signed a five-year contract with Connectpoint, a company specializing in ePaper signage, to provide the digital displays and implement the content management system. The primary funding for the project came from House Bill 2017, the Keep Oregon Moving act, which emphasized bus improvements.