Suspect shot on I-5 in north Portland 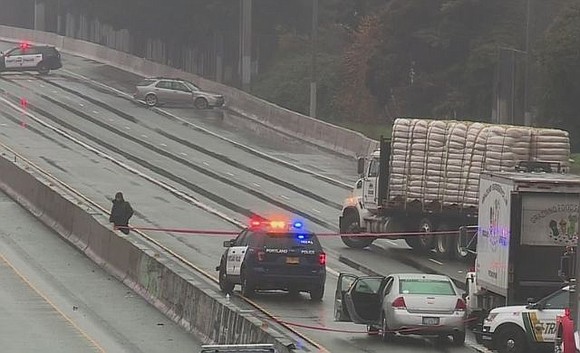 KOIN-TV shows the scene on I-5 in north Portland after police killed an armed suspect following an hours-long incident Monday morning that included a home invasion, several carjackings and gunfire.
Police shot and killed an armed suspect on Interstate 5 in north Portland on Monday, following multiple carjackings and a home invasion. The freeway was closed for hours as authorities investigated.

It started around 9:10 a.m., when police responded to a home invasion near Grant Park in northeast Portland. A short time later police got a report of shots fired outside the Hyatt Regency in the Lloyd District. Soon later, police discovered the suspect in the residential robbery had ditched a stolen car and forced passengers out of a second car at gunpoint.

As officers followed the stolen vehicle, the suspect drove northbound on I-5 — heading into oncoming traffic.
At one point, the suspect got out of the stolen car and attempted yet another carjacking at gunpoint on the freeway, police said. An occupant in the car was hit by gunfire, surviving a non-life-threatening injury.

Nearly 40 police and medical units responded to the incident, which shut down the freeway in both directions.