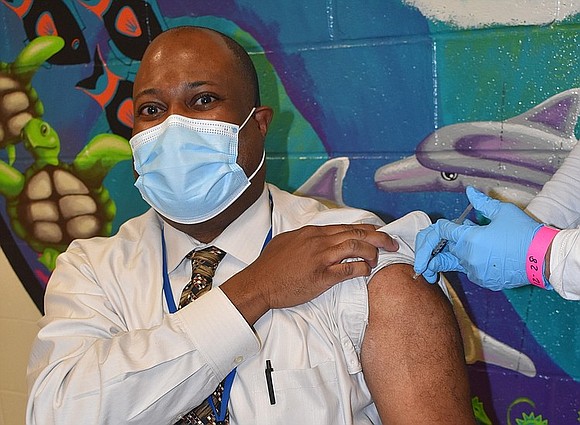 Dr. Warren Roberts, the chief medical director for the Oregon Department of Corrections, received the Moderna Therapeutics COVID-19 vaccine just as the New Year began. Oregon will now begin vaccinating prisoners for the virus after a federal judge agreed with civil rights activists this week that the prison population is at heighten risk of COVID-19 due to their group living situation similar to nursing homes.

Oregon will start vaccinating prisoners after a federal judge ruled against Gov. Kate Brown and the Department of Corrections, ordering inmates to be offered the COVID-19 vaccine along with other groups in Phase 1A.

Brown’s office released a statement on Wednesday, saying the state will not appeal the ruling and instead start vaccinating inmates.

In a lawsuit, civil rights attorneys representing several inmates made the case that the prison population is at heightened risk of COVID-19 due to their group living situations similar to nursing homes. But unlike nursing homes, prisoners were not prioritized first for the vaccine.

Officials have reported that more than 25% of inmates in Oregon have tested positive for the virus and 42 people have died.

“This will save an incredible amount of lives,” said Juan Chavez, an Oregon Justice Resource Center attorney who is representing a group of seven inmates.

The order will allow adults in custody to “stand in the same line” as others in congregate living facilities with a high risk of COVID-19 infection, Chavez said.

In her ruling earlier this week, U.S. Magistrate Judge Stacie Beckerman noted state officials had prioritized residents of other types of congregate care settings, such as nursing homes, but bypassed inmates, despite widespread COVID-19 outbreaks in the state’s prisons.

Beckerman ruled that the state’s previous decision to consider inmates for vaccination only in Phase 1B —after corrections officers and contractors were offered it in 1A — amounted to a violation of the U.S. Constitution’s ban on cruel and unusual punishment.