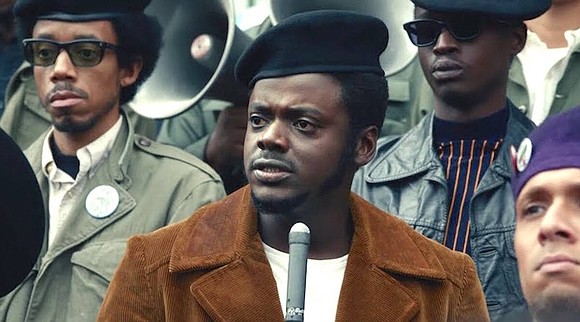 The new film “Judas and the Black Messiah,” now streaming on HBO Max, shines a light on the leadership and assassination of Fred Hampton, chairman of the Illinois Black Panther Party in 1969, and Bill O'Neal, the young man who fed the FBI much of the information that made that assassination possible.

Some of the most dramatic and important American stories have garnered the least attention in popular media. It's an obvious point, but a neglected one--money and power protect whose stories are told and in what way. And that wholly fixable problem becomes harder to address the longer we neglect it--the scale of the untold stories is so large, and how we hear them will be impacted by the ongoing and unnamed skewing of our collective perspective.

It's important to notice this so we accord appropriate respect to artists who make a serious attempt to wade into underexplored territory, and also so that we view our response with appropriate skepticism and curiosity. I want folks to see "Judas and the Black Messiah"--but first I want us to look around. Where are the films depicting the Black Power movement, or the Black Panther Party? And in contrast, how many stories have made it into popular media in which law enforcement are the heroes?

Director Shaka King, collaborating with writers Kenny and Keith Lucas and Will Berson, plunge into the neglected side of that contrast, choosing two canny vantage points: The leadership and assassination of Fred Hampton, chairman of the Illinois Black Panther Party, in 1969, and Bill O'Neal, the young man who fed the FBI much of the information that made that assassination possible. The film is not a biopic, in the usual sense, and it doesn't try to be a definitive account of the Black Panther Party or the Black Power movement--we've got way more stories to explore. But the angles they have chosen, aided by two stunning lead performances and excellent supporting work, open the way to long-overdue curiosity about how the Party and its best leaders were viewed and targeted, and the way the cards were stacked against them, even inside the black community. This film both educates and, if we let it, helps us begin to realize how little we know.

The focus here, wisely, is on a brief window of time, about the last year-and-a-half of the short life of Fred Hampton. Murdered by law enforcement at age 21, he had managed to rise to leadership of the Illinois chapter of the Party, and was a charismatic visionary. Like the older and more famous Martin Luther King Jr. (killed the year before he was), Hampton was clear in his politic, clear in his concern for the crushing and senseless poverty and violence that plagued the black community, and also clear that the black community was not meant to find its natural allies. He saw these problems as solvable, but requiring a revolution.

A focus here is the intensity of the FBI's obsession with bringing down this young man, who was viewed (as King had been) as one of the most dangerous men in America. The film doesn't shy away from the violent rhetoric that was part of the politic of the Black Panthers and of Hampton himself, but subtly and without simplifying, it offers context for that rhetoric. Hampton spoke from a heightened awareness that the stakes for black people and indeed for all people were much higher than popularly imagined, that a complete overhaul--indeed, a revolution--was demanded. That sense of the stakes is perhaps the most important contrast between movement leaders and the rest of the country--and also between Hampton and O'Neal.

Importantly, the film also conveys a sense that Hampton's use of violent rhetoric was not the real, main, or only reason that he was targeted by law enforcement. As brilliantly embodied by Daniel Kaluuya, aided the canny choices of King and the creative team, a picture emerges of a young man motivated by love and prophetic vision, prepared to prioritize "the people" even at the cost of his own interests. Shortly before his death, Hampton elects to put collected resources into a medical clinic rather than into an exile that would have saved his life, ending debate with the simple question, "Is the party about me, or is it about the people?" Now that, friends, is dangerous--and it suggests why the Party's breakfast programs and medical clinics were perceived by law enforcement to be insidious and intolerable. The prevailing argument was that those efforts--getting done what white supremacy did not attempt to do, and with few resources to work with--were not a sign of ingenuity and resourcefulness but rather only a trick to lure people into becoming radicals. But looked at another way, those actions put freedom into the hands of the people and pointed the way to a liberation that was treated as--and arguably is--un-American. "Power to the People" could only be treasonous when viewed from a dominant American culture lens.

The film's focus on Bill O'Neal--the Judas of the title--is just as complicated. O'Neal as a person was more opaque than Hampton--a petty criminal, he became an easy target for the FBI. He was evidently lured by money that, while modest by some standards, was far beyond what he could acquire by other legal means, and he no doubt lacked the principled vision of the stakes that drove those he spied on. But as played by LaKeith Stanfield, he is not exactly a fool or a sociopathic, and he is almost sympathetic. As I've read other reviews critiquing the film on that score, I've paused to wonder if part of the problem is our reluctance to see ourselves in O'Neal. Most of us are much more like him than Hampton--and the culture we all participate in and don't find ways to disrupt creates people like O'Neal who powered the FBI's counterintelligence program, known as COINTELPRO. If we really want to understand this Judas, we would do best to look at ourselves.

The curiosity this film awakened in me sent me to two other films that make good companion pieces. "MLK/FBI" is a new documentary by the venerable Sam Pollard (whose "Two Trains Runnin'" topped my list of the best films of 2016) and explores the FBI's obsession with King. It offers some further unpacking of the dirty methods that were used without any real danger of pushback, and notes that in the 1960s, FBI director J. Edgar Hoover garnered much higher public approval ratings than the hated and feared King. Pollard, too, means to awaken our curiosity--not to what those long-buried tapes of King's private activities might reveal but to what it reveals about us that we are so prone to identifying black visionaries as public enemy number one.

The other is episode 6 of "Eyes On the Prize II," which features not only an interview with Bill O'Neal, but also some good context for the Black Power movement and how the black community in Chicago responded to the government lies told after Hampton's assassination. There is also a chilling account of the uprising in Attica prison, another shameful episode that most of us know too little about.

We've got work to do. I'm grateful for the work of these artists to assist us in undertaking it. "Judas and the Black Messiah" is enjoying a limited theatrical release and is streaming on HBO Max; "MLK/FBI" is streaming on Amazon Prime; and you can find "Eyes On the Prize II," which originally aired in 1990, on YouTube, though it is (tellingly) harder to find than season 1 of the series. Back to work.