I-5 Scar of Displacement Revisited 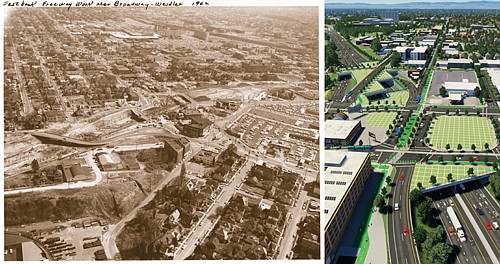 At left, a historic photo from 1962 shows a swath of Portland centered at Broadway and Weidler that is cleared for construction of the I-5 freeway. At right, outdoor plazas as caps over I-5 at the Rose Quarter are envisioned as part of a new plan to increase the lanes of travel on the freeway. The proposal drew wide opposition for not addressing the economic development needs of the historic African American community which was first displaced by the freeway nearly 50 years ago

In June of last year, the nonprofit Albina Vision Trust sent an email to the Oregon Department of Transportation withdrawing support for its proposed I-5 Rose Quarter Improvement Project, which would reconfigure a 1.8-mile stretch of I-5 between the Interstate 84 and Interstate 405 interchanges.

According to Winta Yohannes, Albina Vision’s managing director, the proposal didn’t go far enough to mitigate the harm done to the Black community in the Albina neighborhood when hundreds, maybe thousands, of homes and businesses were bulldozed and the land was sold to make way for I-5, Legacy Emanuel Medical Center, Veterans Memorial Coliseum and other urban renewal projects.

“Despite our good faith efforts, we do not see our engagement resulting in meaningful changes to the project of its anticipated outcomes,” Yohannes wrote.

At particular issue was the potential, encouraged by Albina Vision, for buildable caps, or covers, to be placed over certain portions of I-5 that would allow construction of apartments and businesses. At the time ODOT was projecting a cost of $795 million, but said the cost would be significantly higher if the covers allowed buildable construction.

Pushback was swift, not only from Albina Vision Trust, the grassroots effort that began in 2017 to remake the Rose Quarter district into a fully functioning neighborhood, embracing its diverse past and re-creating a landscape that can accommodate much more than its two sports and entertainment venues, but with several officials, including Mayor Ted Wheeler, also dropping support for the project.

“This was a direct response to the community input we received,” she said. “We want to acknowledge the harm that was done to the Black community.”

Channell said ODOT has done focus groups with members of the African American community and wants to make changes to reflect those public statements and the ideas of Albina Vision Trust.

“We would welcome them back to the table,” she said. “Their voices are important.”

In response to Albina Vision, Channell said ODOT has hired an independent consultant to look at the best use for highway covers through a community process.

“Everything is on the table,” Channell said. “We are focused on working with the community on the design and will produce development scenarios with the board, and then it will go up to the executive steering committee.”

But before any decisions are made, community input will again be invited, Channell said, and the steering committee will direct workshops, starting soon, with the hope that a decision will be made by July about just what will go on the highway covers.

ODOT is already reaching out to community-based organizations about the workshops for “a targeted outreach to maximize historic Albina voices through online tactics,” Channell said. Information will be available on the ODOT website, Oregon.gov/ODOT, in about two weeks, she added.

“This is truly a shift in the way ODOT does business,” she said. “It’s not our typical way of operating, but this is an opportunity, a catalyst as an agency as well.”

“Our goal is to set up job opportunities in a way that helps build a pipeline for wealth generation,” she said. “In partnership with community organizations, ODOT wants to bring jobs to minority communities, but also create apprenticeship opportunities and mentorships, so jobs become careers for future economic growth.”

To help implement these goals, ODOT has hired Hamilton Funds as a consultant and is working with Gramor Construction “with specific focus and dedication” to expanding participation of minority contractors and women.

“So we’re not just building a project, but developing a pipeline for the future and requirements for a workforce we want to see that requires a high level utilization of minorities and women to build the project,” she said.

Channell said ODOT also has established a community oversight committee that will have a direct role in helping shape requirements for contractor.

“The possibility is on the table for highway covers,” Channell said. “The original design assumed more open space, but we heard from the community and some of our partners that we need a different community vision, so we hired an independent contractor, but this will be a community effort.”

Interstate 5 was built in the 1960s and has seen no improvements since then. Channell said ODOT now sees the project as a “generational opportunity” by looking 50 years into the future as far as impacts on the community, which will play an increased role now in the design.

“We at ODOT obviously contribute a lot, but we cannot do it alone and we are excited about community partners,” she said.