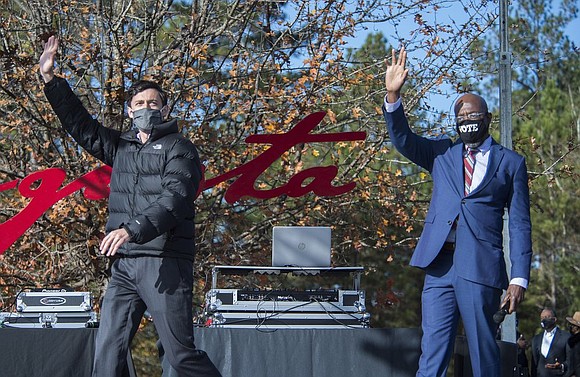 Jon Ossoff (left) and Rev. Raphael Warnock won both George Senate seats in Tuesday’s runoff election in the state. The two Democrats are pictured during a campaign rally in Augusta, Ga., on Monday. (AP photo)

(AP) — Matching its historic vote for Joe Biden in November, Democrats won both Georgia Senate seats — and with them, the U.S. Senate majority — as final votes were counted Wednesday, serving President Donald Trump a stunning defeat in his turbulent final days in office while dramatically improving the fate of President-elect Joe Biden’s progressive agenda.

Warnock, who served as pastor for the same Atlanta church where civil rights leader the Rev. Martin Luther King Jr. preached, becomes the first African American from Georgia elected to the Senate. And Ossoff becomes the state’s first Jewish senator and, at 33 years old, the Senate’s youngest member.

In an emotional address early Wednesday, Warnock vowed to work for all Georgians whether they voted for him or not, citing his personal experience with the American dream. His mother, he said, used to pick “somebody else’s cotton” as a teenager.

“The other day, because this is America, the 82-year-old hands that used to pick somebody else’s cotton picked her youngest son to be a United States senator,” he said. “Tonight, we proved with hope, hard work and the people by our side, anything is possible.”

Georgia’s other runoff election pitted Perdue, a 71-year-old former business executive who held his Senate seat until his term expired Sunday, against Ossoff, a former congressional aide and journalist.

President Trump’s false claims of voter fraud cast a dark shadow over Tuesday’s runoff elections, which were held only because no candidate hit the 50% threshold in the general election.

AP VoteCast, a survey of more than 3,700 voters in Tuesday’s contests, found that Black voters made up roughly 30% of the electorate, and almost all of them — 94% — backed Ossoff and Warnock. The Democrats also relied on the backing of younger voters, people earning less than $50,000 annually and newcomers to the state.

“Georgia’s first Black senator will make the (Senate) chamber more reflective of our country as a whole and open the door for a Congress that can forego gridlock for gridlock’s sake to focus instead on the many crises facing our nation,” Obama said.