Stepping Up and Standing Up 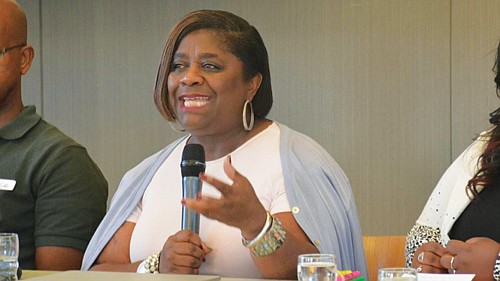 Sharon Gary-Smith, newly elected Portland NAACP president, is from a Portland family historically rooted in advocating for racial justice. “An angry, gentle Black woman,” who knows how to channel that passion into constructive action,' she tells the Portland Observer.

It wasn’t the leadership she sought, but Sharon Gary-Smith’s entire life has prepared her to be the new president of the Portland NAACP.

“I come from a family where you didn’t get a choice about stepping up and standing up,” she said. “The idea of doing the work of justice — moving racial and social justice forward — you did it. You didn’t have a choice.”

Her parents were local activists and taught her the lessons of the late civil rights leader Dr. Martin Luther King and the importance of advocating for change at an early age.

Born and raised in Portland, Gary-Smith is the eldest of four daughters of Bobbi Lou Mosley-Gary and Frederick Douglass Gary Jr. Her father was a graduate of Tuskegee Institute, now Tuskegee University, the historically Black college in Alabama which molded his outlook, she said, and the family took pride in his being a “Tuskegee man.”

“For us, our family, and our community, Tuskegee resonated with them. Their students, young men, came out prepared to support their community,” she said. “We understood George Washington Carver’s legacy, which they didn’t teach us much about in school.”

Her mother was also involved in her community, urging others to get involved in fighting for justice.

“She was supposed to be a stay-at-home mama, but she went to the streets, telling other mothers why they needed to get out and fight,” Gary-Smith recalled. “She was a pistol and we were fed justice and resistance with food every day and were taught resistance to injustice at every meal.”

They also shared their own histories to support their activism.

“My father was born in Hampton, Virginia, where he learned about living in a segregated state,” she said. “My mother was from Kansas City, Missouri, the “Show me state,” but more importantly, it was the historical swing state (in the vote) on whether slavery would continue.”

These were the “missing pieces” in her education that her parents filled in through their own teaching, day in and day out.

The family was considered Black middle class, she said, and she and her sisters were taught, “To those much is given, much is expected.” The advice was reinforced with a lot of support and encouragement.

“They told us little Black girls, ‘You’re smart, you’re bright and we expect you to be excellent.’ My parents set the standards, not the school. ‘You have an excellent mind. You’re smart.’ ”

Gary-Smith used those smarts when she began her professional career in the mid-1970s when she was chosen to lead the city’s anti-poverty agency, the Portland Metropolitan Steering Committee, a $4 million agency organization that managed 22 community-based programs.

She went on to later direct a neighborhood health clinic in Seattle, and in the mid-1980s joined the Black Women’s Health Project in Atlanta, where she served for eight years as National Self-Help Director. Following that, she moved to Austin, Texas to work for the Texas Urban League and was special advisor to then-Texas governor Anne Richards.

After returning to Portland in 2007, Gary-Smith was a director for Cascadia Behavioral Health Care and in 2011, was chosen to lead the MRG Foundation, a leading social and racial justice funder.

She has received many honors over the years, and last March was named an Outstanding Oregon Woman of Achievement by Gov. Kate Brown.

After all those years of work, Gary-Smith decided to retire, but that didn’t last long. When former Portland NAACP President E.D. Mondainé resigned in October after being exposed in the Portland Mercury for alleged physical and sexual assault, she answered the call.

Gary-Smith was not sorry to see him go. She said she and female other members of the Portland NAACP had been overlooked and experienced sexism and ageism under that past leadership, which was “very male dominated,” she said.

Not any more. The new leadership, with Gary-Smith as president, is almost all female now, she said.

“We do shared leadership,” she said. “I believe in learning and leading, and that you can do both.”

Gary-Smith didn’t accept running for chapter president right away, but after many entreaties to lead the organization, she eventually decided she had to follow her mother’s advice to “walk the talk.”

Though she had planned to relax and travel in retirement, she answered the call to lead and then recruited more young women of all stripes, including more radical members to join her.

“I was quite radical back in the day,” she said. “I know how to sit at tables, but sometimes you need to flip the table and build a new table that seats more people.”

She describes herself as “an angry, gentle Black woman,” who knows how to channel that anger into constructive action.

“Age and experience tempers you,” she said. “I know how to sit in board rooms…and I know those marching around the building — that used to be me.”

But she has high hopes for the future of the Portland NAACP, where membership and donations skyrocketed after the killing of George Floyd by police officers in Minneapolis. Support for civil rights and the NAACP have grown from many white folks who feel guilty about the treatment of Blacks in this country, and that is a good thing, she said.

“I don’t want guilt to be the only reason they donated,” she said. “I want them to be involved and say, ‘How can I be an ally for racial justice in this country?’ “

The guiding light for Gary-Smith’s leadership are the teachings of Dr. King, she said, a philosophy for peace and racial progress that applies to everyone.

“Whites can be our accomplices,” she said. “Not just because they felt bad about George Floyd, but about the continued racism in this country, and the unequal disproportionate harm to us.”

Now is the time for reckoning, for dialogue and for the nation to heal, she said.

“It is time for great opportunities and the NAACP should be at the forefront for the right reasons, with others who are seeking justice,” Gary-Smith said.