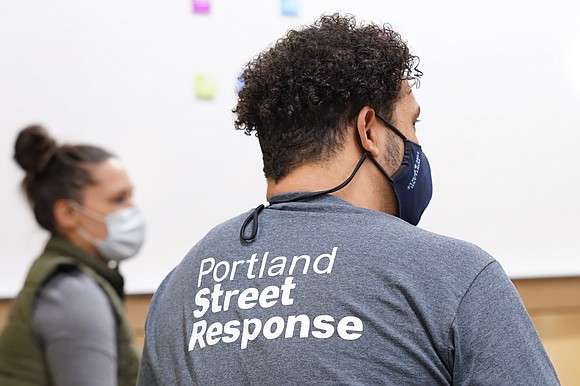 Members of Portland’s Street Response team undergo training as part of a new program to help people living on the streets in times of crisis rather than routing them through the criminal justice system. Photo courtesy Portland Fire & Rescue

Trained health care professionals who are not members of law enforcement have started to assist people in Portland as part of an innovative non-police response to people in crisis.

The aim of the Portland Street Response team is to help those living on the streets in times of crisis rather than routing them through the criminal justice system. The pilot program, championed by City Commissioner Jo Ann Hardesty, got its start on Monday, Jan. 11 in the Lents neighborhood of southeast Portland.

Operating under Portland Fire & Rescue, the outreach is geared to houseless people in crisis, or someone experiencing a behaviorial issue or mental health crisis. The team is staffed by a program manager, a firefighter/paramedic, a mental health clinician and two community health workers.

Sara Boone, Portland’s first Black fire chief, said she was thankful to the many people who worked to create the special outreach, bringing the city another avenue to respond to the emergency needs of communities.

“I’m excited to see this team hit the streets in its pilot form so we can better learn how to help those experiencing houselessness or mental health crises,” she said.

Street Response team members underwent a month-long training program. They studied topics such as peer support, mental health first aid for adults and youth, crisis de-escalation, making risk assessments for suicide and other mental health concerns, as well as training on things such as emergency radio usage and 9-1-1 dispatch protocols.

Lents was designated as the first pilot location because it has fewer existing resources and services than other parts of Portland, officials said. Additionally, the volume of potential crisis calls involving houseless people in Lents have outpaced the growth of such calls across the rest of the city.

The team is scheduled to work Monday through Friday, 10 a.m. to 6 p.m. After six months, a second pilot team will be added to cover the same area but respond at night and on the weekends. By 2022, the program is scheduled to ramp up to include more teams and coverage to locations across the city.

“When I ran for office in 2016, I knew that there was a better way to help people on the street and to respond to mental health crises without involving police,” Hardesty said. “After years of working with the community to come up with a better solution to assist people who need help instead of handcuffs, executing on this promise is one of most exciting moments of my time in City Hall.”

Hardesty, who serves as Fire Commissioner, thanked Chief Boone and Fire & Rescue members, saying they enthusiastically stepped forward to make the Street Response Team a reality. She also thanked Mayor Wheeler for his support and collaboration.

“This project is a marathon, not a sprint, and I thank everyone for their patience while we build something from the ground up. I’m excited to see what we will discover during this pilot program that will inform how we make this the best program we can for the whole city,” she said.

“We’re excited to start training to get our team on the ground and start responding to calls, said Program Manager Robyn Burek. “This project is a collaborative effort between many bureaus and agencies; this pilot is our opportunity to learn and finesse the program so it can serve constituents effectively when we roll it out to the rest of the city.”