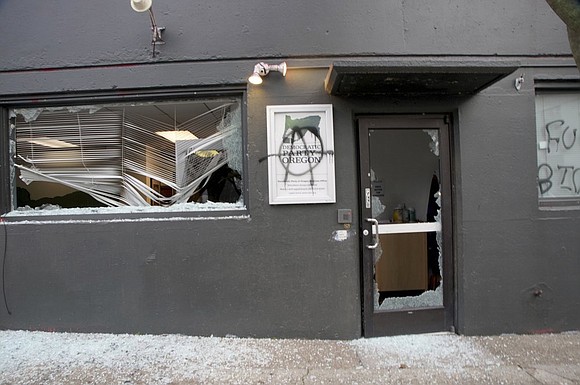 A group of protesters carrying anti-President Joe Biden and anti-police signs marched in the streets and damaged the headquarters of the Democratic Party of Oregon at Northeast Ninth and Davis on Inauguration Day, Wednesday, Jan. 20. (AP photo)

The Democratic Party of Oregon is expressing unwavering support for the new Biden-Harris administration and its push for action on racial justice, immigration and environmental issues, showing its resolve after an attack on its state headquarters in northeast Portland on Inauguration Day, Wednesday, Jan. 20.

A group of mostly white protesters, dressed in black clothes and carrying signs against President Joe Biden and police marched to the Democratic Party offices on Northeast Ninth and Davis during the afternoon. One person was seen carrying a Black Lives Matter sign. Others carried a banner declaring “We Are Ungovernable.”

Demonstrators march during a protest on Inauguration Day in southeast Portland. (AP photo)

Party officials said they were thankful that staff members were not in the building at the time. Some in the group of about 150 protesters broke out all of the ground floor windows of the headquarters office, dragged dumpsters into the street and lit their contents on fire, and left graffiti. Eight arrests were made.

“This is not the first time our building has been vandalized during the past year – none of the prior incidents have deterred us from our important work to elect Democrats up and down the ballot, and this one will be no different,” a statement from the political organization said.

“None of this should take away from the fact that today is a joyous and momentous day for America as we celebrate the Inauguration of President Joe Biden and Vice President Kamala Harris. President Biden is already starting the work to build back better, with more than a dozen critical Executive Orders on climate, pandemic response, immigration, racial equality, and more,” the statement continued. “We at the Democratic Party of Oregon are resolute and determined to do everything in our power to support the Biden/Harris administration, and to help Oregon and America recover from the pandemic stronger than before.”

At least three left-wing protests blocked streets and generated police responses on Inauguration Day in the city. No right-wing protests materialized despite warnings from officials.

A peaceful car caravan that started at Portland Community College in north Portland celebrated the transition of presidential power and urged policy changes like police reforms and environmental policies that support disadvantaged communities.

But a protest gathering at the Immigration and Customs Enforcement office in south Portland later that night turned violent when protestors applied graffiti to the building and federal police officers responded by dispursing a tear like gas to break up the crowd. Six arrests were made.