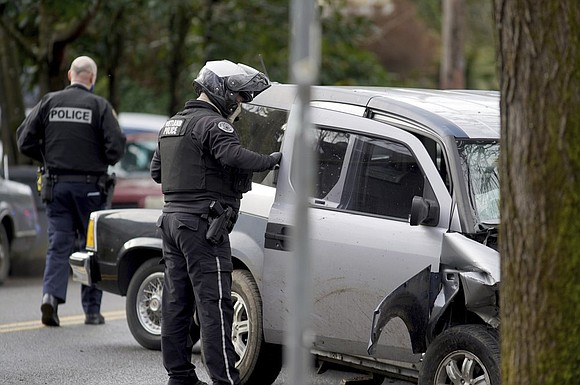 Police investigate after a driver struck and injured at least nine people, killing one woman, over a 15-block stretch of Southeast Portland Monday afternoon. Some residents on Southeast Stark who watched the events were convinced the damage and destruction was intentional. (AP photo)

Portland police have identified the driver accused of speeding through a southeast Portland neighborhood Monday afternoon and plowing into pedestrians and bicylists on the sides of streets and sidewalks, injuring at least nine people and killing an elderly woman.

Some residents on Southeast Stark who witnessed the rampage were convinced the damage and destruction was intentional, something police say appears to be the case.

Police continued their investigation Tuesday along a crime scene that spans at least 15 city blocks, from Southeast 33rd Avenue to Southeast 19th Avenue, along parts of Stark, Belmont and Washington streets.The woman who died has been identified as 77 year-old Jean Gerich of Portland. 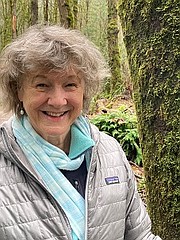 Police identified the woman who died in Monday's hit and run rampage as as 77 year-old Jean Gerich of Portland. The Oregon State Medical Examiner determined she died of blunt force trauma and ruled her death a homicide.

Rivas was taken into custody almost immediately after he crashed his vehicle and tried to flee. Nearby residents first cornered the motorist, keeping him at bay until three police officers arrived to tackle him to the ground.

Detectives reported Tuesday that they found no evidence that this was an act of terrorism, a bias crime or was politically motivated. But detectives said that the driver's actions did show intent to hit and injure people.

According to Portland Police Bureau spokesperson Derek Carmon, police received a call shortly after 1 p.m. that a driver had hit a pedestrian. Additional calls then came from people saying a person driving the same suspect vehicle, a Honda Element, was striking other people and vehicles, he said.

Larry Wolfe told reporters that he had an appointment to meet the person who was killed, a woman in her 70s. He said he saw her get hit by the car and scream, and was walking toward her when the car came back, hit her again, did a U-turn and dragged her along the pavement.

The family of the woman killed released a statement Tuesday mourning their beloved mother and grandmother:

'Jean Gerich was not a nameless victim. She was a loving mother of two. She was a proud grandmother of five, ages 4 to 16. She would have turned 78 in twelve days. She beat cancer five years ago. She received her first vaccination shot last week and was overjoyed to get out in the world again. She has lived in the city of Portland since 1972 and for those 48 years she has loved her community of friends, Forest Park, and the proximity to nature. We are grateful for the good Samaritans who were at the scene."