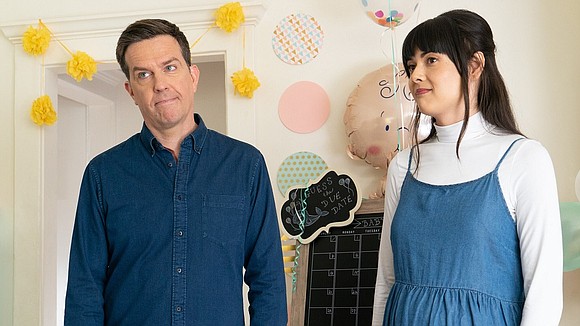 Ed Helms and Patti Harrison explore love and parenthood from unexpected angles in ‘Together Together.’ (Courtesy of Bleeker Street Media)
Two films available for screening now find the truth, humor, and beauty outside the lines of dominant culture and convention and in the spaces where things appear to be slightly askew.  Both films evoke laughter, tears, and deeper thought that you might at first expect.

“Together Together” is set up to look like a romantic-comedy; middle-aged single man Matt (Ed Helm, excellent) engages a gestational surrogate, Anna (Patti Harrison, a revelation), so that he can realize his longing to be a parent, and some sort of relationship ensues. But this film doesn’t just rely on the unusual circumstances to carry all the weight of this story; it finds truth here that feels more honest and relatable than in any rom-com.

Matt is 45, white, and well-off, having designed an app that allows people to essentially window-shop for people they are not going to date. Anna is a 26-year-old Asian-American barista trying to scrape together the means to resume her plans to attend college, which were derailed by a teenage pregnancy that her family seems not to have gotten over. Matt is earnest, well-meaning, and inclined toward too many opinions about how Anna lives while carrying his child; Anna has already relinquished one child and adopts a sort of matter-of-fact stance—but perhaps because of the losses she has suffered, she notices a lot and is quite capable of holding her own against Matt’s intrusions. And both are unattached—which does not mean that they are destined to be “together together,” as Anna’s coworker notes, but does support a kind of togetherness that in some ways feels more together than a lot of romantic relationships do.

Along the way, things happen that will make you think of your own life no matter what your experience (speaking as someone who has never given birth nor been a biological parent, but who has deep relationships that frequently don’t fit into conventional boxes). Matt’s resourcefulness about his situation is admirable but also necessary; people put so little effort into understanding and supporting what they don’t know how to categorize. While much about Matt’s circumstances is nevertheless enviable, it’s not hard to understand why Anna would find herself happy to spend time with him despite their many differences. And Anna—well, Patti Harrison steals this movie, capturing more complexity in a look or in the tone of a brief comment than most rom-com protagonists manage to convey in clunky exposition. Anna is somehow herself without having quite figured out all of what that means; though she means to be diffident, she also is curious, and Matt’s earnestness (along with the realities of carrying a life) seem to open her too, even despite herself.

Rita Moreno on the set of 'West Side Story,' as shown in the documentary 'Rita Moreno: Just a Girl Who Decided to Go For It' (Courtesy of MGM Media Licensing)

I approached “Rita Moreno: Just a Girl Who Decided to Go For It” with some wariness—not because I don’t admire the Latina icon of stage and screen (I very much do) but because I braced against the way icons from marginalized communities are used to feed a narrative about the “American dream”—that anyone from even the most humble beginnings can make it here if they just “decide to go for it.”  Sure enough, within the first few minutes of the film, President Obama and television writer and producer Norman Lear herald Moreno as the embodiment of the “American dream.”

Although the film never directly confronts those statements, it tells Moreno’s story in a way that puts the lie to them. Yes, Moreno came to U.S. with her seamstress mother from Puerto Rico at age five and, by age six, she was dancing in Greenwich Village nightclubs and signed a contract with MGM while she was still a teenager. At age 20, she appeared in “Singin’ in the Rain,” and she won an Oscar for “Westside Story” when she was 30.

But a large chunk of Moreno’s career involved roles that she felt ashamed of while she was playing them; she was required to use make-up to darken her skin and enlisted to play a string of stereotypical ethnic “others”—island girls, concubines, sex objects—and expected to employ indistinct ethnic accents. The type-casting continued even after her Oscar win and since, by then, she had decided to refuse such roles, she didn’t work in film for several years. She was raped by her agent and regularly experienced sexual abuse throughout her early career. And an extended and tempestuous relationship with Marlon Brando culminated in a botched abortion and a suicide attempt. The American dream is regularly a nightmare, even for its most successful dreamers—and for every person who decides to go for it and “succeeds,” how many talented dreamers don’t manage to survive such obstacles? And what kind of success was denied to even someone as successful and talented and determined as Rita Moreno?

Those questions get fair (if sometimes indirect) attention from this film, ably directed by Mariem Pérez Rivera, in large part benefitting from Moreno’s own quite remarkable self-awareness and commitment to honesty.  We are fortunate that someone with such a juicy life story (Moreno is now almost 90) has also clearly done the personal work to reflect on her life with clarity that affords her the somewhat rare capacity to hold the “both-and” of her experiences.  She speaks frankly of the abuses she has withstood in Hollywood, of the self-hate that impacted her relationship with the “lust of her life,” Marlon Brando, of his good advice that she needed therapy (advice he might well have self-applied), and of a long and apparently loving and successful marriage that also made her feel trapped.  She expresses both gratitude for the meatiness of the role that won her an Oscar, and also reflects on the complexity of playing a character whose embrace of “America” famously involves rejection of her native Puerto Rico.  (Terry Gross’s recent interview of Moreno on “Fresh Air” offers an interesting supplement to the film, especially as to Moreno’s role in “West Side Story.”)

The result is a remarkably helpful examination of what is better termed the American nightmare—redeemed in rare cases by those who are especially resilient and who also choose not to forget (against lots of pressure) that there are plenty in their communities who work just as hard, decide to go for it, and don’t succeed.  Moreno’s peculiar combination of buoyancy, resilience, and honesty allow this film to tell a truer story than we normally get to see, and also affirmed much of the experience of this Latina and likely many others.  It’s currently enjoying a theatrical run.