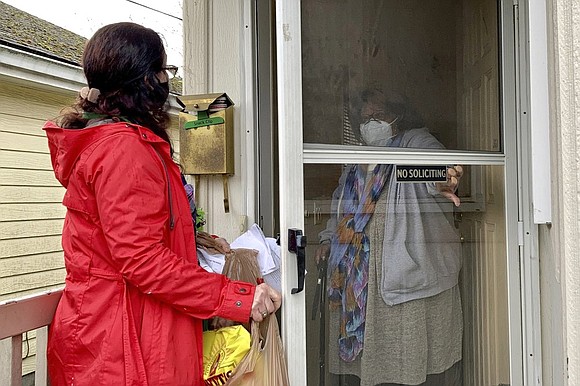 Portland senior Barbara Bender answers the door for nonprofit Store to Door employee Nancy Murphy as she delivers an order of groceries. Nonprofits, churches and health care outreach workers are scrambling to reach older people who are falling through the cracks in efforts to receive a COVID-19 vaccine. (AP photo)

(AP) — Jean Andrade, an 88-year-old who lives alone, has been waiting for her COVID-19 vaccine since she became eligible under Oregon guidelines nearly a month ago. She assumed her caseworker would contact her about getting one, especially after she spent nearly two days stuck in an electric recliner during a recent power outage.

It was only after she saw a TV news report about competition for the limited supply of shots that she realized no one was scheduling her dose. A grocery delivery service for homebound older people eventually provided a flyer with vaccine information, and Andrade asked a helper who comes by for four hours a week to try to snag her an appointment.

“I thought it would be a priority when you’re 88 years old and that someone would inform me,” said Andrade, who has lived in the same house for 40 years and has no family members able to assist her. “You ask anybody else who’s 88, 89, and don’t have anybody to help them, ask them what to do. Well, I’ve still got my brain, thank God. But I am very angry.”

Older adults have top priority in COVID-19 immunization drives the world over right now, and hundreds of thousands of them are spending hours online, enlisting their children’s help and traveling hours to far-flung pharmacies in a desperate bid to secure a COVID-19 vaccine. But an untold number like Andrade are getting left behind, unseen, because they are too overwhelmed, too frail or too poor to fend for themselves.

The urgency of reaching this vulnerable population before the nation’s focus turns elsewhere is growing as more Americans in other age and priority groups become eligible for vaccines. With the clock ticking and many states extending shots to people as young as 55, nonprofits, churches and advocacy groups are scrambling to find isolated elders and get them inoculated before they have to compete with an even bigger pool — and are potentially forgotten about as vaccination campaigns move on.

An extreme imbalance between vaccine supply and demand in almost every part of the United States makes securing a shot a gamble. In Oregon, Andrade is vying with as many as 750,000 residents age 65 and older, and demand is so high that appointments for the weekly allotment of doses in Portland are snapped up in less than an hour. On Monday, the city’s inundated vaccine information call line shut down by 9 a.m., and online booking sites have crashed.

Amid such frenzy, the vaccine rollout here and elsewhere has strongly favored healthier seniors with resources “who are able to jump in their car at a moment’s notice and drive two hours” while more vulnerable older adults are overlooked, said James Stowe, the director of aging and adult services for an association of city and county governments in the bistate Kansas City area.

“Why weren’t they the thrust of our efforts, the very core of what we wanted to do? Why didn’t it include this group from the very outset?” he said of the most vulnerable seniors.

Some of the older adults who have not received vaccines yet are so disconnected they don’t even know they are eligible. Others realize they qualify, but without internet service and often email accounts, they don’t know how to make an appointment and can’t get to one anyway — so they haven’t tried.

Still others have debilitating health issues that make leaving home an insurmountable task, or they are so terrified of exposure to COVID-19 that they’d rather go unvaccinated than risk venturing out in public to get a shot.

To counter access disparities, the Biden administration said Wednesday that it will partner with health insurance companies to help vulnerable older people get vaccinated for COVID-19. The goal is to get 2 million of the most at-risk seniors vaccinated soon, White House coronavirus special adviser Andy Slavitt said.

Slavitt says insurers will use their networks to contact Medicare recipients with information about COVID-19 vaccines, answer questions, find and schedule appointments for first and second doses and coordinate transportation. The focus will be on reaching people in medically underserved areas.

Sara Plush, a Portland Fred Meyer store employee, adds a sheet with information about how to get a COVID-19 vaccine. An untold number of older people are getting left behind in the desperate dash for shots because they are too frail, overwhelmed, isolated or poor to navigate a system that favors healthier individuals with more resources. (AP photo)

Non-profits, churches and advocates for older people have already spent weeks figuring out how to reach disadvantaged Americans over age 65 through a patchwork and grassroots effort that varies widely by location.

Some are partnering with charities like Meals on Wheels to distribute vaccine information or grocery-delivery programs like the one which alerted Andrade. Others are mining library card rosters, senior center membership lists and voter registration databases to find disconnected older people.

Reaching out through organizations and faith groups that marginalized older Americans already trust is key, said Margaret Scharle, who developed a vaccine outreach toolkit for her Roman Catholic parish in Oregon. The “low-tech” approach, which other charities started using, relies on door-knocking, paper brochures and scripted phone calls to communicate with residents over 65.

“Once you’ve been blocked so many times in trying to make an appointment, you might give up. So we are working as hard as we can to penetrate the most marginalized communities, to activate networks that are already existing,” said Scharle, who after the initial contact offers assistance with scheduling appointments and transportation.