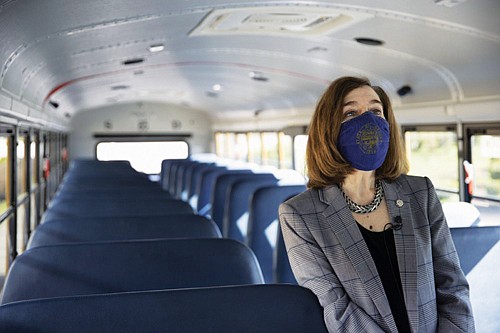 Oregon Gov. Kate Brown boards a school bus to observe how teachers and staff were preparing for the return of in-person learning. The governor has issued a new executive order mandating that all public schools provide universal access to in-person learning by the month's end for students up to fifth grade and by mid-April for older students. (AP photo)

(AP) – Gov. Kate Brown and legislative leaders announced Monday that they plan to spend up to $325 million in state and federal money to help fill the gaps in students’ pandemic-year learning with summer programs.

The largest expenditure will be $90 million for grants that will add summer enrichment activities for students in grades K-8. Another $72 million will be for grants districts can use to help high school students catch up over the summer.

Last week, Brown issued a new executive order mandating that all K-12 public schools provide universal access to in-person learning by the month’s end for students up to fifth grade and by mid-April for older students.

State education officials have until March 19 to revise their guidelines for in-person instruction to help districts facilitate the return of students, Brown said.

“It’s very positive and definitively a step in the right direction — and frankly, it’s about time. Clearly, it’s been hard for districts to figure out what’s going to be best for their students, and it’s taken a long time,” said Katie Chrisman, who has a child each in elementary school, middle school and high school in the Portland suburbs.

Her children “haven’t had a ton of suffering, but they’re definitely not thriving — and for me, that’s been the biggest concern,” she said.

Rylee Ahnen, spokesman for the Oregon Education Association, the state’s largest public school employees union, said in a statement that teachers support returning to the classroom if it can be done safely.

The union understands the frustrations of both school districts and parents, he said, as everyone navigates how to return to class. He added that most districts were already planning to some sort of in-person learning in the coming weeks.

“We hear, understand, and share the frustration expressed by many in our communities about the uncertainty this pandemic has caused for our public education system,” he said.

Oregon started vaccinating teachers in January ahead of seniors, but the state health department can’t say for sure how many educators have been vaccinated because it does not track the profession of recipients. The union also could not say what percentage of teachers have received the vaccine.

Portland Public Schools, the state’s largest district with 49,000 students in 81 schools, was already planning to bring elementary students back in April.