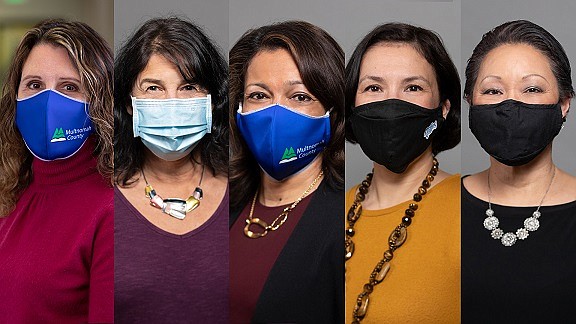 Members of the Multnomah County Board of Commissioners wear face masks to prevent the spread of the coronavirus.

The Multnomah County Board of Commissioners has asked Secretary of Homeland Security Alejandro Mayorkas to prohibit the use of chemical munitions by federal police when in close proximity to schools, neighborhoods, and other areas where vulnerable children and adults may work, live or play.

In a March 15 letter, the Board decried the use of tear gas in residential areas, parks, and other places where vulnerable individuals may be present, and called on Secretary Mayorkas to ban or restrict their use by federal law enforcement officers.

Commissioner Sharon Meieran led the effort after hearing concerns from a Portland school and a community service provider located near the U.S. Immigration and Customs Enforcement facility in the South Waterfront area, the K-8 Cottonwood School of Civics & Science and REACH Community Development.

The ICE facility has been the site of many protests during which federal law enforcement officers have deployed tear gas as a method of crowd control. Physical debris and residual toxic chemicals have been found on the schoolyard, causing significant concern about the environmental and physical health impacts on young children, teachers, and the surrounding neighborhood, county officials said.

“This indiscriminate use of chemical weapons does not just affect protestors, but also harms neighbors who are unwittingly exposed in their own homes. We have heard from residents jolted awake by tear gas drifting into their homes through open windows, and parents deeply worried about how to clean their homes and yards of residual chemicals to make it safe for their own children to play. It is unacceptable for people to be exposed to toxic chemicals in their own homes and neighborhoods,” the commissioner said.

If the practice is allowed, the commissioners said it should be extremely well-regulated and authorized only in very narrow circumstances, and in no areas where children and vulnerable adults may be affected.