Follows his attack on Black man killed by police 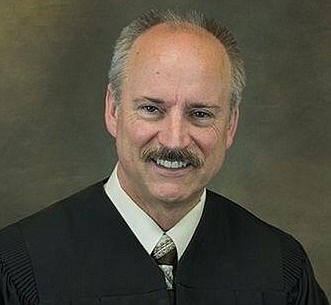 Clark County District Court Judge Darvin Zimmerman has decided to take time off to reflect on his behavior after a hot microphone in his courtroom captured the judge ridiculing the victim of a police shooting as “the Black guy they were trying to make an angel out of.”

(AP) — A Vancouver judge will take time off to reflect on his behavior after he came under pressure for making critical comments about Kevin Peterson Jr., a Black man killed last year by police.

Clark County District Court Judge Darvin Zimmerman made the announcement Tuesday following condemnations from the Vancouver NAACP, other judges, a decision by prosecutors to seek his removal from their criminal cases and a call from a prominent law firm for him to resign.

Zimmerman said he will determine what he can do to help heal community he has served.

Last week, Zimmerman was caught on a hot microphone in his courtroom describing Peterson as “the Black guy they were trying to make an angel out of,” and said, among other comments, he believed Peterson “was so dumb.”

The judge also happens to be the father to a Clark County Sheriff’s office deputy who was on the scene of Peterson’s shooting last Oct. 29, but didn’t fire his weapon.

Court records say three Clark County deputies shot Peterson, of Camas, on Oct. 29 after authorities said he sold Xanax pills to a confidential informant in Hazel Dell. Deputies fired 34 rounds at the 21-year-old, who died after being hit four times. Peterson was carrying a gun but investigators have found no evidence that he fired it.

In a story by The Columbian on Monday, Zimmerman told the newspaper, “any time we lose a life, it is a tragedy; Kevin Peterson is no exception.” But he did not apologize for his statements or describe them as racist.

The judge said Peterson’s father had told a police chaplain he felt the shooting was justified but, “the next day, he wakes up with dollar signs in his eyes and George Floyd’s attorneys had already contacted him.”

In a statement Tuesday issued on Zimmerman’s behalf by attorney Josephine C. Townsend, he said, “I have always prided myself in being open minded, fair and just in my duties as a judicial officer. I do understand that even my personal comments, when made public – bring about an outcry of concern because I am a judicial officer.”

The statement said Zimmerman deeply regrets his comments that have caused divisiveness and concern in the community.

Townsend said Zimmerman self-reported his statements to the Commission on Judicial Conduct over the weekend, which has the power to investigate the comments and recommend that the Washington Supreme Court take action against him.

“I want my colleagues and the public to know that I have accepted responsibility for my actions,” Zimmerman’s statement said.