Company has emitted toxins for decades 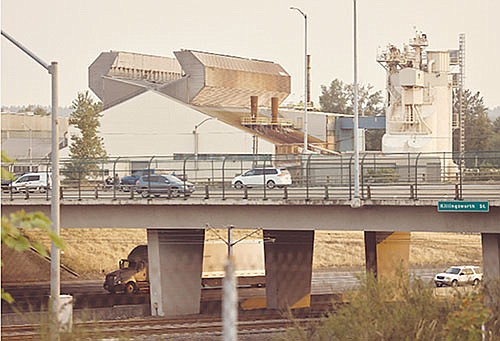 The Owens-Brockway glass facility is located in the Cully Neighborhood, north of Columbia Boulevard and just west of I-205. Photo by Mason Trinca/courtesy Earthjustice

A glass recycling plant in the Sumner neighborhood of northeast Portland has consented to either shut down or install pollution control technology, according to an agreement announced between the plant’s operators and the state of Oregon.

The Oregon Department of Environmental Quality gave Owens-Brockway the two options after it reached an agreement with the company to resolve a fine of more than $1 million for pollution violations it issued in June. The glass plant was cited for multiple, ongoing air quality violations of particulate matter emissions as well as permitted opacity.

A recent report by environmental advocates highlighted the ongoing heath risks posed by air emissions from the plant, impacting residents, including the adjacent Cully neighborhood. The plant does not follow the same set of air regulations as similar emitters because it was built before the Clear Air Act took effect in 1978, officials said.

“It has been clear for years that this facility is pumping many different kinds of harmful pollution into the Cully neighborhood,” Mary Peveto, executive director of Neighbors for Clear Air, said in the report.

DEQ Northwest Regional Administrator Nina DeConcini was hopeful that the company will continue to operate but with new safeguards. The company has not announced which direction it will eventually take.

DEQ spokesperson Lauren Wirtis said the $1 million fine will be cut by more than half under conditions that the company takes the major steps needed to improve air or water quality or reduce hazardous waste.

Cully residents and environmental organizations have been asking federal and state regulators for stricter air quality enforcement for the facility.

Earthjustice, a public-interest environmental law organization, conducted an air modeling study that found the  plant was emitting harmful pollutants, including nitrogen oxides, sulfur dioxide and lead into the surrounding environment, impacting three nearby schools and a park where youth play and get exercise.

Segio Lopez, climate and transportation program coordinator for Verde, a nonprofit group in the Cully Neighborhood, was hopeful the agreement between the plant and DEQ would resolve some of their concerns.

“This a huge step in the path forward for our community,” he said. “There’s still more work to do and the fight for good continues. Thank you to the many organizations, community partners and community members whose advocacy, engagement, and organizing pushed this agreement forward. Together we can hold polluters accountable.”